I like BigGANs but their pics do lie, you other AIs can't deny

Gaze at the computer-created horror of Dogball

Pics Images generated by AI have always been pretty easy to spot since they are always slightly odd to the human eye, but it’s getting harder to differentiate what’s real and fake.

Researchers from DeepMind and Heriot-Watt University in the UK have managed to significantly boost the quality of images simulated by a generative adversarial network (GAN) by increasing the size of the machine learning model, which they dubbed BigGANs.

The best results, including pictures of a brown dog with floppy ears, a island landscape, a butterfly, and a cheeseburger, look like real photos at first glance.

Keep staring, however, and you will begin to see some slight inconsistencies. The dog’s eyes are glazed over and there is a weird patch that doesn’t belong to the butterfly’s wing. These are still the best images created by GAN, according to the results published on arXiv late last week.

The trick to getting more realistic results is to make everything bigger. “We demonstrate that GANs benefit dramatically from scaling, and train models with two to four times as many parameters and eight times the batch size compared to prior art,” the paper said.

BigGAN is trained on ImageNet, a popular dataset used for image classification tasks containing millions of images of different objects. The one that performs best has a batch size of 2,048, meaning it slurps up that number of images from the dataset during each training iteration. Neural networks go through many cycles of training to process the whole dataset several times.

It also has over 158 million parameters - properties describing the images that can be learned during the training process - and required 128 Google TPU3 Pods to train a model in about one to two days.

Another technique, the researchers call the “truncation trick,” forces the generator to create images that are more similar to the training dataset, making them more realistic.

“The output of the generator is controlled by how much variability its input has. Our technique makes the output less variable, but higher quality, by reducing the variability of the input,” Andrew Brock, a PhD student at the Edinburgh Centre of Robotics, at Heriot-Watt University, told The Register.

Brock told El Reg, he is also worried about how GANs can be used maliciously. “It's part of why I chose to focus on more general image modeling rather than faces - it's a lot harder to use images of Dogball for political or unethical purposes than it is to use an image of another person.” 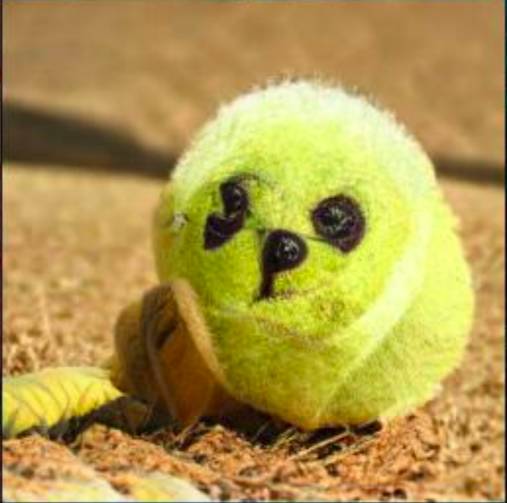 Dogball! A cross between a some kind of dog and a tennis ball. Image credit: Brock et al.

GANs have helped developers create art and although they might not seem to have much practical importance, they’re interesting to study.

“Neural nets which can generate convincing samples have to learn the rich structure that underlies our complex visual world - you have to ‘understand’ something in order to draw it. If we can build models that understand that thoroughly then there's a lot of interesting things we can do with the representations they learn,” he added. ®