NVMe-FC, predictive analytics and roadmap away from VIMMs

Violin Systems is making the most of being rescued by private equity, with new hardware and software, and a focus on tossing its hat into the all-flash array performance ring.

The company crashed into bankruptcy following a poor IPO. It was bought out of Chapter 11 by a George Soros-controlled private equity fund and relaunched only to suffer a second blow when CEO Ebrahim Abbasi resigned for health reasons.

Chairman Mark Lewis took on the CEO role. Now the firm has fired its first shot in its battle to return from the dead.

Violin has positioned its XVS 8 as a tier-0 extreme performance array with consistently low latency. Violin has claimed it is faster than mainstream all-flash arrays (AFAs) and reckons customers need fewer servers and associated software licences to run the same applications.

Note the circular QR tag on the lower part of the front bezel.

The XVS 8 uses a 3U enclosure, Broadwell Xeon CPUs and 768GB of RAM, with 8GB/sec bandwidth as well as:

Violin said the dedupe LUN performance has improved by about 40 per cent.

The system can scale to >422TB raw in one namespace (1.3PB effective) with capacity pooling across shelves.

Symphony management software can look after multiple Violin arrays. These arrays stream telemetry data to a central management resource, where machine learning routines are applied to it. 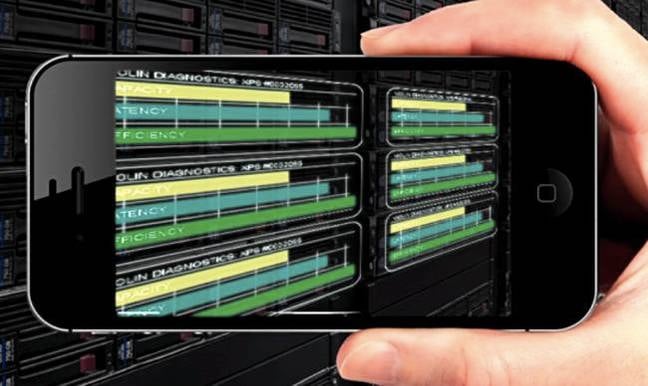 This includes a so-called augmented reality smartphone app; scan the QR code on the array's front and data is sent to the phone by Violin's cloud-based predictive analytics software, delivering real-time views of system performance. Admins can find out per-LUN performance, when capacity will run out and whether dedupe is working for specific workloads. This information is also accessible via browsers.

XVS integrates into the Splunk ecosystem for customers to get filtered call-home alerts into their Splunk dashboards.

There will be a Concerto OS update early in the first 2019 quarter.

There will be a second flash drive form factor coming, with SSDs, using 3D TLC NAND, attached to either or both sides of the VIMM board, providing 4 and 8TB drives, and scaling out to half a petabyte. This TLC NAND is slower than the MLC flash currently being used and the system's software needs development to overcome this.

COO Todd Oseth said the economics of SSDs would help Violin. There will need to be microcode additions to give Violin's software direct control of the flash inside the SSDs and so enable its performance.

Violin claimed the XVS 8 will have economics similar to the traditional AFA vendors but the performance of the NVMe-oF startups.

He reckoned that could equate to a 40-60 per cent reduction in a customer's IT infrastructure costs.

The key to Violin's success is going to be proving its tier-0 performance credentials.

The Violin XVS 8 is available through the Violin channel network now. ®