Uncle Sam gives itself the right to shoot down any drone, anywhere, any time, any how

This one's not going to get abused, not at all 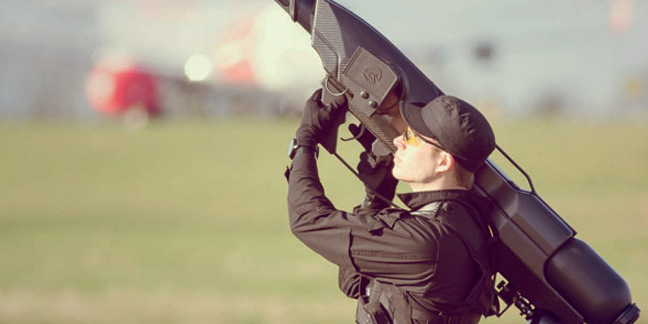 The US federal government has just authorized its staff to shoot down any drone they consider a threat.

The provision was added to the routine reauthorization act for the Federal Aviation Authority (FAA) – the watchdog that deals with America's skies – and has invited the ire of civil liberties groups who are unhappy at the blanket nature of the shoot-down authorization.

Under the proposed law's "preventing emerging threats" section, a new part has been added that allows a wide range of federal departments to "disable, disrupt, or seize control of" any drone that is thought to pose a "credible threat… to the safety or security of a covered facility or asset." The key thing here is a wide range of departments – not just the military.

The act [PDF] lists a range of increasingly harsh measures that can be taken against an unauthorized drone, ending with "use reasonable force, if necessary, to disable, damage, or destroy the unmanned aircraft system or unmanned aircraft."

The provision is, of course, entirely understandable: the explosion in the use and sale of advanced drones does pose a potential threat to government facilities, especially with idiots doing things like mounting guns on them. At a meeting earlier this year, the FAA showed a video of an ISIS drone dropping a grenade to make its point.

But critics point out that the FAA keeps taking an aggressive approach to drones, introducing strict rules – such as a requirement to register them and pay a registration fee – rather than softer rules that it can then tighten up if necessary.

There are basically no safeguards written into the law so pretty much anyone in the Justice Department, or Homeland Security, or Department of Transportation, or a whole slew of government departments can shoot down a drone, claim they felt it posed a risk, and get the full backing of the federal government.

White House: Is it OK to hijack, shoot down, or snoop on drones? Er ... asking for a friend

An earlier version of the bill included privacy protections, added after various group lobbied their Congressional representatives and privacy watchdog EPIC sued the FAA but they were pulled out in the final bill, and now the FAA is only required to file a report on drone surveillance risks.

In the majority of cases, the law will likely be applied logically – if a drone flies into controlled airspace or into secure facilities or hovers over a congressional press conference. But currently it also gives the authorities carte blanche to take down a drone if they just don't want it there – which could have significant implications for journalism, film-making and activism.

The Electronic Frontier Foundation (EFF) and American Civil Liberties Union (ACLU) acknowledge the concern behind the law but argue it is the wrong approach.

"If lawmakers want to give the government the power to hack or destroy private drones, then Congress and the public should have the opportunity to debate how best to provide adequate oversight and limit those powers to protect our right to use drones for journalism, activism, and recreation," argued the EFF.

It's not clear what limits and oversight would work best – certainly a requirement to get a warrant is unlikely to work given the fact that drones can appear at any time and unexpectedly – but limiting the grounds for which a drone can be disrupted or destroyed would be one start point, or granting protections to legitimate drone usage.

As it stands, as soon as President Trump signs the bill, your flying machine can be taken down by a huge number of federal government employees and there will be pretty much no recourse. ®