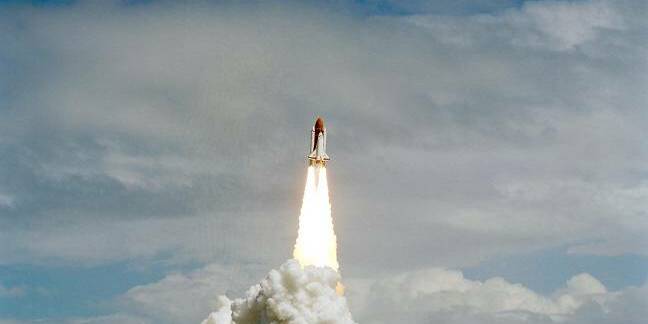 While NASA continues its 60th birthday celebrations and Russia gives a slight cough and gestures vaguely at the silver beach-ball sized Sputnik it flung into orbit 61 years ago this week, another anniversary ticked over: it is 30 years since the Space Shuttle returned to flight.

STS-26, flown by Space Shuttle Discovery, glided to a landing at Edwards Air Force base on 3 October 1988, having successfully launched from Kennedy's pad 39B on 29 September. The mission, more than two-and-a-half years after Challenger exploded, flew a very different Shuttle, but brought with it a harbinger of the fate that would eventually befall Columbia, 15 years later.

Discovery, which was originally planned to be the first Shuttle launched from Vandenburg, California, later in 1986, went through an extensive phase of modifications. Pretty much every major system was removed and shipped back to vendors for modification or overhaul.

The Shuttle was powered up again on 3 August 1987 as workers crawled over it, implementing the modifications identified following the Challenger disaster, including what NASA described as "robust" changes to the landing braking system and drag chute, leak and burn-through prevention in the Reaction Control System (RCS) and Orbital Manoeuvring System (OMS) and the infamous Crew Escape System.

Until the arrival of the escape pole, the only options a Shuttle crew had (PDF) in the event of a launch problem were the relatively civilised Abort To Orbit, the considerably hairier Transoceanic Abort Landing (which involved landing the orbiter in Africa or Western Europe, having not achieved orbit), and Abort Once Around (returning after a single orbit). And then there was the near-suicidal RTLS (Return to Launch Site).

RTLS involved pitching the orbiter around after the boosters had been jettisoned and blasting back towards Kennedy before dumping the external tank and finally landing. Calling the manoeuvre risky is an understatement, and the late John Young, who flew the first Shuttle mission, remarked that it required "continuous miracles interspersed with acts of God to be successful".

The Inflight Crew Escape System added a bailout option to save the crew having to actually land the orbiter. The theory went that, having jettisoned the external tank, the gliding Shuttle would descend to 25,000 feet, slowing to 230mph. The side hatch would be jettisoned and an escape pole extended 9.8 feet downwards (enough to stop a crew member smacking the wing on their way out). NASA reckoned it would take 90 seconds for an eight-person crew to jump, one after another.

Launch and a loss of insulation

It took a while for nervous engineers to allow the Shuttle to launch (PDF). A leak was detected in the left OMS pod, which required repair, and it took two attempts to achieve the 22-second flight readiness firing of Discovery's engines after a sluggish fuel bleed valve scuppered the first.

Launch eventually went ahead at 1137 EDT after a delay of one hour and 38 minutes due to high winds and a need to replace fuses in the cooling system. The climb to orbit appeared relatively uneventful. The mission went comparatively smoothly, deploying the third Tracking and Data Relay (TDRS) satellite – the second had been destroyed in the Challenger disaster – and conducting numerous experiments. The crew didn't have the most comfortable of times as the orbiter cabin Flash Evaporator System iced up, raising the temperature to more than 30°C (86°F) for part of the mission.

However, unnoticed by ground observers, the launch had not gone entirely to plan. At T+52.2 seconds, a chunk of cork from the right-hand solid rocket booster (SRB) struck the underside of the orbiter's wing, leaving a damage crater (PDF) measuring 18 x 6 x 1.5 inches and tiles required replacement before Discovery could fly again. A piece of external tank insulation was also noted passing over the orbiter.

The very next mission, STS-27, would suffer damage far more severe (PDF) when ablative coating applied to the boosters resulted in 707 damage sites on the orbiter including the loss of a tile from the forward right fuselage. Fortunately for the crew, beneath the tile was the L-band antenna cover which, while partially melting during re-entry, survived well enough for the Shuttle to land successfully.

STS-26 was a critical mission, giving NASA a much-needed boost in the wake of Challenger, and paved the way to the agency launching, and then fixing, the Hubble Space Telescope and assembling the International Space Station (ISS).

30 years on, the shuttles are in museums and NASA astronauts are ferried to space in Russian Soyuz capsules. NASA and its commercial partners now reckon that flights from US soil to the ISS will be "operational" by August 2019, eight years after the last shuttle flew. Discovery, which also flew the second Return to Flight mission after the Columbia disaster, can now be seen parked up in at the National Air and Space museum in Virginia. ®