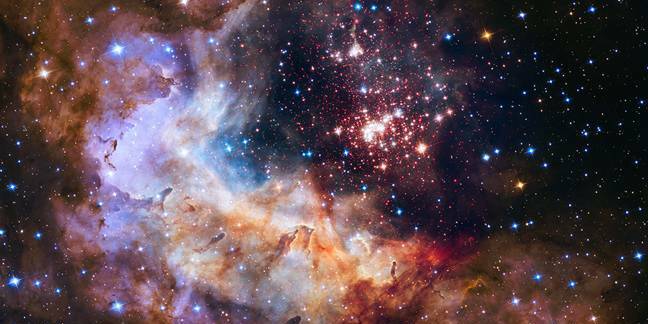 Space-watchers have been nervously watching that bit of space occupied by the Hubble Space Telescope as NASA tries to diagnose a problem with its gyroscopes.

The Register first noticed a questionmark over Hubble's health during the weekend, when Michigan State University astronomer Jay Strader tweeted rumours that it was in safe mode "following a gyro failure".

As supporting evidence, he said, there was a two-day gap in the data, something backed up by Icelandic astronomer Steinn Sigurdsson, who provided this link to its schedule.

It’s true. Very stressful weekend. Right now HST is in safe mode while we figure out what to do. Another gyro failed. First step is try to bring back the last gyro, which had been off, and is being problematic.

Built with multiple redundancies, Hubble had six new gyros installed during Servicing Mission-4 in 2009. Hubble usually uses three gyros at a time for maximum efficiency, but can continue to make scientific observations with even just one gyro.

"NASA is working to resume science operations of the Hubble Space Telescope after the spacecraft entered safe mode on Friday, October 5, shortly after 6:00 pm EDT," the agency wrote. "Hubble's instruments still are fully operational and are expected to produce excellent science for years to come."

The gyro that failed is one of three in service keeping the telescope aimed and steady, NASA said, and it had been "exhibiting end-of-life behavior for approximately a year" so "its failure was not unexpected".

NASA sent a December 1999 Space Shuttle service mission (described here) that replaced failed gyros, and a mission in 2009 (the one Hubble's twitter team referred to) again replaced gyros to extend the telescope's life.

"The remaining three gyros available for use are technically enhanced and therefore expected to have significantly longer operational lives," NASA said today.

There is, however, another problem. Right now, only two of the three gyros are working properly: "Upon powering on the third enhanced gyro that had been held in reserve, analysis of spacecraft telemetry indicated that it was not performing at the level required for operations."

Goddard Space Flight Center and the Space Telescope Science Institute staff are now working out what can be done to "recover the gyro to operational performance", and an "Anomaly Review Board" has been put together to develop a recovery plan.

NASA's preference, the post said, is to return Hubble to service in its standard three-gyro configuration. If that's not possible, it can operate using a single gyro, keeping the second in reserve.

"While reduced-gyro mode offers less sky coverage at any particular time, there is relatively limited impact on the overall scientific capabilities," NASA said. ®

NASA says New Horizons' next stop might have a moon

Remember that 747 with an open door and a telescope? It spotted a moon-esque blip

We were wrong about the chicken drumstick, OK?

Kuiper-belt-bound craft needs a few weeks of tweaks to prepare for Space Duck 2.0

Close Encounters of the Kuiper Belt kind: New Horizons to come within just 3,500km of MU69

Probe skipped past Pluto by 12,500km, so this rock needs to prepare for its close-up