NVMe-over-Fabrics fanboy startup E8 had previously smashed the benchmark in January this year.

The SPEC SFS 2014 benchmark was introduced in January 2015 and tests four aspects of a filer's performance:

An Electronic Design Automation (EDA) workload was introduced in December 2017.

The benchmark is an end-to-end system rather than a component-level test. This means DDN's results can only be compared to other suppliers on the software build test: 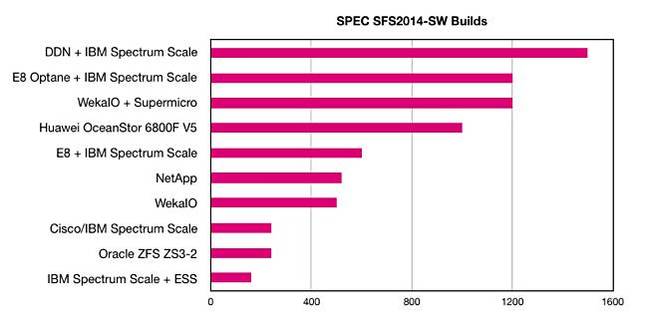 DDN's is the fastest software build result to date.

Using a legacy parallel file system and SAS-interconnect SSDs in a Fibre Channel-connected array, DDN beat both E8, which used fancy Intel Optane drives and the NVMe protocol, and WekaIO with its ground-up redesigned file system.

Let that sink in for a moment: it used a Fibre Channel SAS SSD array to outperform an array full of NVMe-connected Optane SSDs. ®