What do you get for 50 per cent more layers? Not a lot

Western Digital has a 96-layer NAND chip for smartphones and has spoken of higher embedded storage capacity while seemingly delivering exactly the same capacity as before. 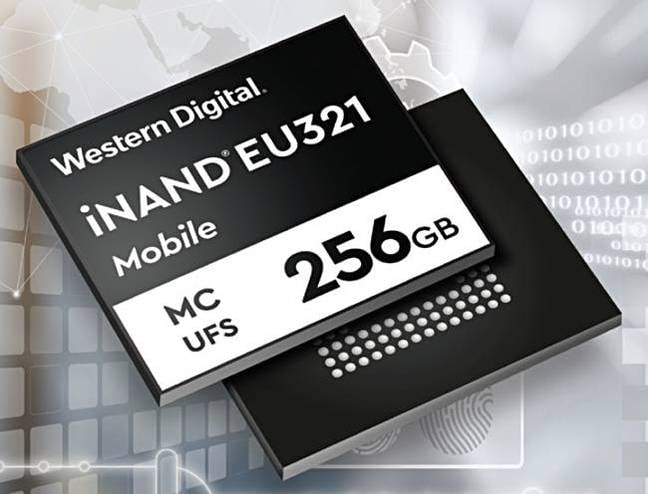 Both drives employ an SLC cache to speed writes.

Back in July WD said it was sampling a 96-layer, 4 bits/cell (QLC) device. QLC flash is inherently slower than TLC NAND and that could explain the performance pattern. We’ve asked WD about the capacity, performance and NAND type issues.

Ziv Paz, director of technical product marketing at WD, said the EU321 drive is "TLC, but we announced in July that volume shipments for 96-layer QLC are expected to commence this calendar year beginning with consumer products  under the SanDisk brand."

Regarding the device's physical size, Paz said: "11.5x13x1 is a JEDEC standard package size for UFS - regardless of the NAND dies inside - to allow a drop-in replacement path."

The industry is driven by user smart mobile devices needing more storage as 5G speeds and 4K video set users' expectations higher, but clearly that need hasn't changed as the EU311 gives way to the EU321.

Paz said of the different sequential read/write and random read/write IOPS performance of the EU311 and EU321 drives:

"We are using different attributes of the flash to produce iNAND products targeted for each different market segment based on customer need and application requirements. At the product level we balance and optimise many factors such as power, endurance, read and write performance etc. to support different markets including mobile, automotive and surveillance.

"Tuning in" to the needs of the market explains the performance differences, not the introduction of QLC flash. That should come later this year in SanDisk consumer drives, but not in these EU series embedded flash drives. ®