Finally, a use for AI and good old-fashioned simulations: Hunting down E.T. in outer space

Targeted ads, coming to a galaxy nowhere near you 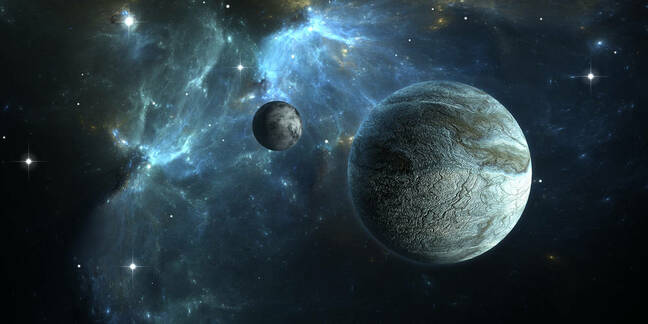 Google Cloud has teamed up with NASA’s Frontier Development Lab to search for extraterrestrial life using simulations and machine-learning technology.

Figuring out where exactly life may exist in outer space is non-trivial: it's not always clear which specific conditions and materials are necessary for living things to survive. In other words, it's not always obvious whether or not a world or cosmic body hundreds of trillions of miles away has the necessary ingredients and positioning. All we really have to go on is Earth as a case study.

Scientists often have to piece together bits and pieces of information from various planets and rocks to guesstimate the ideal conditions needed to support life as we know it. What boffins could really do with is more concrete models of worlds that likely to foster life, and then use those scenarios to filter heavenly bodies. If an alien planet fits a model, it may be home to life.

As such, developers at Google Cloud have produced simulations of various worlds that could support life. The first project models a planet’s atmospheric properties, such as its density, temperature, chemical makeup, pressure, and the concentration of specific biological compounds. The software, known as Atmos, is aimed to help scientists look for potentially life-harboring planets, starting with atmospheres similar to that on Earth.

“Interestingly, Atmos starts with the concentrations of these molecules found on Earth, and then adjusts the concentrations in small increments to simulate an effectively limitless number of permutations, within rational or physically stable bounds,” said Massimo Mascaro, technical director of applied AI at Google Cloud, earlier this week.

These simulations can be then compared with real data to assess the likelihood that a given planet could harbor life.

Astrobiologists are mostly interested in rocky exoplanets that lie in the habitable zone around their parent stars, where liquid water may exist on its surface. NASA’s Kepler spacecraft has spotted a handful of these in the so-called Goldilocks Zone – where it's not too cold or too hot for life.

As such, a second team from Google and NASA’s lab has built a machine-learning-based tool known as INARA that can identify the chemical compounds in a rocky exoplanet's atmosphere by studying its high-resolution telescope images.

To develop this software, the brainiacs simulated more than three million planets' spectral signatures – fingerprints of their atmospheres' chemical makeups – and labelled them as such to train a convolutional neural network (CNN). The CNN can therefore be used to automatically estimate the chemical composition of a planet from images and light curves of its atmosphere taken from NASA’s Kepler spacecraft. Basically, a neural network was trained to link telescope images to chemical compositions, and thus, you show it a given set of images, and it will spit out the associated chemical components – which can be used to assess whether those would lead to life bursting on the scene.

INARA takes seconds to figure out the biological compounds potentially present in a world's atmosphere. “Given the scale of the datasets produced by the Kepler telescopes, and the even greater volume of data that will return to Earth from the soon-to-be-launched Transiting Exoplanet Survey Satellite (TESS) satellite, minimizing analysis time per planet can accelerate this research and ensure we don’t miss any viable candidates,” Mascaro concluded. ®