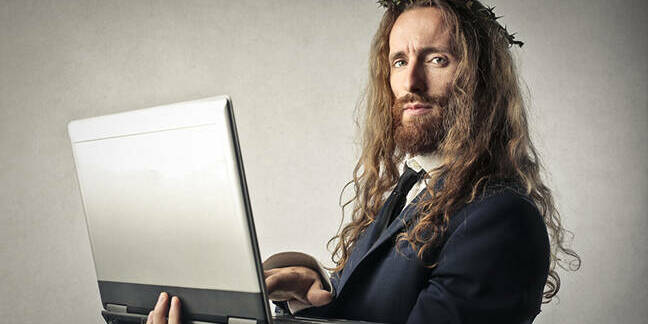 Open-source database SQLite has told its developers it expects them to follow Christ, love chastity, clothe the naked, and not murder, steal, nor sleep with their colleagues' spouses.

That's the upshot of a somewhat untypical code of conduct that the widely used project has published online. While most code of conducts take an irreligious approach, urging people to be respectful of others' views and treat everyone nice, SQLite has instead gone for rules drawn up by St Benedict more than 1,500 years ago.

To be fair, those rules did have a significant impact on the world back in AD 500, and continue to form the foundation for Benedictines' behavior to this day, but it is a little unusual to find software developers being urged to "prefer nothing more than the love of Christ" and "be not addicted to wine" (there is no mention of coffee or pizza, however).

The code of conduct has drawn significant attention this morning, complete with the inevitable Twitter wave of rage and condemnation. "So SQLite decided to adopt a code of conduct, which is great," noted infosec bod Darren Meyer, for instance. "But they decided to adopt one that isn't practical to enforce and that excludes anyone who's not an adherent to an Abrahamic tradition."

"Well, it looks like it may be time to stop using SQLite as it's readily apparent that my kind is not welcome there," sighed programmer James Hollingshead.

Bear in mind, though, the code of conduct has been online for eight months, and, according to the original author of SQLite and its main administrator, D. Richard Hipp, he received "100 per cent buy-in from all committers prior to publishing."

In the past eight months, he admits some contributors have called the code of conduct a little "weird" but that "there was no drama. Until this morning," he told The Register.

Many assumed the document is an internal joke, albeit an odd one, in part thanks to the preface noting it was created because SQLite has been "encouraged by clients to adopt a written code of conduct." Not so.

Hipp told us the clients that urged a code of conduct be created to govern community interactions "seemed to not care what the CoC was, as long as it was written down." But he defends the "Christian values" that the document represents and points out that SQLite source code has a "blessing" at the top of each file in place of a license and includes the Jesus-inspired phrase: "Find forgiveness for yourself while forgiving others."

So why didn't he simply edit out irrelevant details – such as "love fasting" and "fulfill God's commandments daily in your deeds" – and retain the aspects that do in fact make for healthier communities such as "do not return evil for evil," "do not curse those who curse you," "be not proud," "be not a grumbler," and "be not a detractor"?

"I could have edited the list down to just those aspects that seem relevant to coding," Hipp told us. "But that would put me in the position of editing and redacting Benedict of Nursia, as if I were wiser than he. And I considered that. But in the end, I thought it better to include the whole thing without change (other than translation into English). In the preface, I tried to make clear that the introspective aspects could be safely glossed over."

In the face of today's attention, which has included a wave of aggressive responses accusing Hipp of un-Christian behavior – he tells us he updated the preface to highlight the fact that by adopting St Benedict's rules he was not seeking to exclude anyone.

"Nobody is excluded from the SQLite community due to biological category or religious creed," he told us. "The preface to the CoC should make this clear. The only way to get kicked out of the SQLite community is by shouting, flaming, and disrespectful behavior. In 18 years, only one person has ever been banned from the mailing list."

In other words, Hipp decided to adopt a seminal Christian text rather than grab some cookie-cutter code of conduct from elsewhere, reflecting his beliefs and, he believes, the general world view of those who contribute to open-source software projects for free.

Although it can be a little jarring to read testaments to God and Jesus in what is normally a secular document urging mutual respect, there is a long history of similar actions in the United States – perhaps most famously on Dr Bronner's soap (although the messages printed on its products have since been scaled back).

While it may make some uncomfortable to be faced with religious screed while maintaining software, it's hard not to note that Linux kernel creator Linus Torvalds could well have benefitted from similar clear messages over the past few decades.

Torvalds has this week resumed the reins at the Linux Foundations following a brief hate hiatus in which he promised to get some counseling for his aggressive and abusive behavior. Perhaps someone should send him a copy of St Benedict's "instruments of good works." Or a link to SQLite's code of conduct. ®

It's Hipp to be square: What happened when SQLite creator met GitHub

The 'Hub is not really about Git any more, says Fossil architect

DEF CON You've heard of ROP? Now get a load of QOP

Another remote-code execution hole in top database engine SQLite: How it works, and why not to totally freak out

You know the drill: Patch and stop using C

You better watch out, you better not cry. Better not pout, I'm telling you why: SQLite vuln fixes are coming to town

May your days be merry and bright, and may you all go patch your SQLite

Tempfile permissions a can of worms