Not to be outdone by the open sourcing of an early version of MS-DOS for Intel chippery, version 5 of RISC OS – arguably the original commercially successful Arm operating system – is going fully open source.

RISC OS was designed and developed by Acorn Computers, once dubbed the Apple of Britain, in the 1980s to run on the fledgling 32-bit Arm processor family, also designed by Acorn. Yes, the Arm that now powers the world's smartphones, embedded electronics, Internet-of-Things, and more, although it's come a long way since its mid-1980s genesis.

The operating system, meanwhile, began life as the rough-around-the-edges Arthur 1.20 in 1987 for the ARM2-powered Archimedes A305 and A310, and by 1989, had morphed into the more slick RISC OS 2, written mostly in handcrafted assembly language for performance and memory-footprint reasons.

It had windows, icons, menus, and a mouse pointer – the menus being particularly cool because they could be opened pretty much anywhere with the middle mouse button. You didn't have to go to a menu bar: middle click over something and get a context-relevant menu pop up. You could dynamically allocate memory to different subsystems by dragging bars in the task manager. You felt in control of the underlying hardware from your fingertip on the mouse.

Crucially, it was entirely ROM based, meaning it loaded fast from chips on the motherboard and couldn't be altered by viruses. For a while, Acorn users were pretty smug watching PC and Amiga friends have their operating systems trashed by malware, although there were a few RISC OS-specific nasties that ate people's files. The malware just couldn't touch the underlying OS fixed in ROM.

Interestingly enough, RISC OS was highly modular: the kernel was the core glue of the OS, and pretty much everything else – the filesystems, desktop GUI, font renderer, drivers, sound system, etc – was loaded as software modules, either from motherboard ROM, disk, or add-on podules – the Acorn equivalent of ISA and PCI cards. These software modules could be restarted, replaced, removed, and inserted as necessary on the fly to change system functionality, which was, to be honest, pretty cool for a microcomputer in the 1980s and early 1990s. Other operating systems had similar features, but Acorn's approach felt clean and sane.

Whereas the Amiga had lots of graphical oomph from its dedicated video chipset, Acorn hardware was underpowered in that area, with a basic frame buffer and no graphics acceleration, although it much later gained support for AGP graphics cards. Here's a 1996 technical demo, called Jojo by Archiologics, which attempted to squeeze the maximum out of an integer-only, non-accelerated 8MHz ARM2 core:

The cooperative-multitasking, single user, closed-source GUI-driven RISC OS was developed in the years after 1989, gaining TCP/IP networking, the ability to kill crashed applications, and many other features, as Acorn expanded its Archimedes range through to the ARM3 A5000, and into the RiscPC series, which were powered by 30 to 40MHz ARM6 and ARM7 CPUs, and 233MHz StrongARM processors developed with DEC. If you want to discover more about classic RISC OS 3 and the RiscPC, see the video below...

Intel x86-compatible coprocessors could also be fitted to run DOS, Windows, and Linux side-by-side simultaneously with RISC OS on the same desktop in a true asymmetric multi-processing (AMP) environment.

It was hard going for Acorn to compete against, at the time, Wintel: the Windows-Intel alliance. Acorn got a significant foothold in the UK market by being backed by the BBC in its computer literacy project, and its systems ended up in classrooms nationwide. When the A3000-series of Archimedes landed, Tesco – a massive supermarket chain in Britain – gave out vouchers to parents, depending on how much they spent at the tills, which could be given to schools to spend on Acorn computers. Collect more vouchers by buying more groceries, get more money to schools to spend on computers. Effectively, the Tesco for Schools vouchers scheme bankrolled British education to buy British computer technology and processors for British classrooms. Acorns in every school.

Then, disaster. A combination of Acorn not quite being able to keep up with its humongous American tech rivals, a lack of applications specifically used in the workplace (cough, cough, Microsoft Word), and Tesco switching its support to Windows PCs for schools, led to dying sales, dwindling momentum, lack of developer interest, and the eventual collapse and breakup of Acorn in 1998. Its Arm processor design division continued on as a public company that we all now know today, and RISC OS 3.8 ended up in the hands of Pace Micro, an at-the-time British maker of cable set-top boxes that put an embedded version of ROS to work in its kit.

Pretty much everyone got rich off the breakup of Acorn, which at the time was a parent to the up-and-coming Arm, except the community of enthusiasts, dealers, resellers, and developers who had bought into and supported Acorn products for a decade or more. Luckily, though, a desktop flavor of RISC OS was licensed during the Acorn-Pace handover to a small UK company called RISC OS Ltd that developed and sold the operating system from version 4 in 1999 to version 6 in the 2000s, adding things like DHCP support, long filenames, improved stability and user interfaces, and lots more. Various esoteric systems popped up supporting this post-Acorn RISC OS, such as the ARM7500-based RiscStation.

During this resurrection, another company called Castle emerged in the early 2000s with RISC OS 5 that it claimed it had the rights to via an agreement it had earlier secured during the Acorn-Pace transition. Castle produced a desktop computer called the Iyonix that was powered by a 32-bit Arm-compatible 600MHz Intel XScale processor, which was built on StrongARM designs Chipzilla had acquired from a legal battle with DEC, and shipped it with its closed-source RISC OS 5. 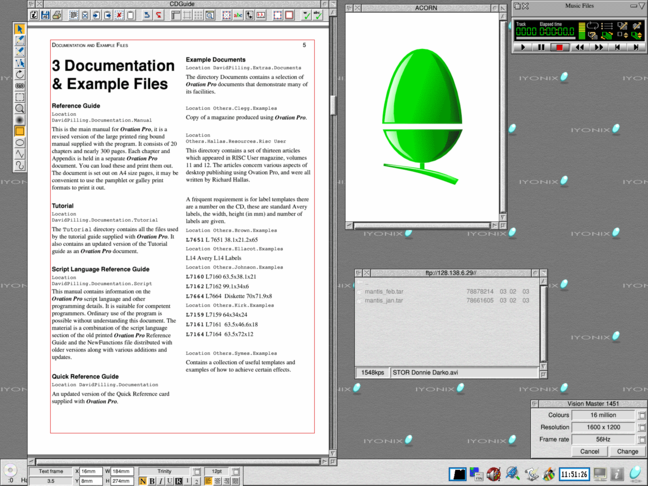 There was a little, er, debate over who exactly had the rights to desktop RISC OS – Castle or RISC OS Ltd – but ultimately Castle ended up acquiring RISC OS 5 from Pace, and RISC OS Ltd continued on with its flavor of its OS. Then Castle opened up its source code to the public with a "shared source" license, meaning you could basically use and improve it as you wanted for non-commercial purposes. An organization called RISC OS Open was set up, with Castle's blessing, to steward the development of the OS, which has been ongoing since 2007.

While development of RISC OS 6 has stalled to a complete halt as a closed-source product since the late 2000s, RISC OS 5 continues to be developed and improved as a source-available technology, with enthusiasts and programmers contributing materials and code. The OS, as tight and nimble as ever, now runs on a decent range of Arm-compatible devices – RaspberryPis, PandaBoards, BeagleBoards, RiscPCs, etc – and, as we said, is now being relicensed under Apache 2.0.

For its time, RISC OS had a startlingly modern desktop that flew along on the ill-fated Archimedes and RiscPCs. It really was, and for its fans still is, a joy to use.

RISC OS Developments Ltd, which was formed in 2016 with the intent of bringing RISC OS to new markets, acquired Castle this year, along with the RISC OS 5 intellectual property. The company has now open-sourced the operating system under Apache 2.0 with RISC OS Open to continue looking after the thing.

Those nostalgic for the good old days will, of course, find BBC BASIC still bundled in the package. Purists would point out that using BBC BASIC on anything other than a BBC Micro is heresy. Heretics, arguably, have more fun.

Hardware-wise, there are, as we said, options for running the thing. Emulators and virtual machines will also get the job done, although loading the tiny image onto an SD card and sticking it into a RaspberryPi will be more fun. Particularly if you feel like squeezing that Pi into the shell of an unloved 1980s Acorn Micro or Archi to get whole retro thing going on. On modern hardware, the venerable OS runs like lightning.

Pi supremo Eben Upton observed: “RISC OS is a great demonstration of how much performance a well-tuned operating system and user interface can wring out of a platform.”

The directors of RISC OS Developments Ltd hope that the move will inject some life into the OS, with director Andrew Rawnsley saying: “This move unlocks a lot of opportunities for RISC OS that were previously inaccessible due to former licence restrictions.”

While we’d take issue that the move will allow BBC BASIC to remain “fresh and relevant” – there are arguably other languages better suited to the modern world – the open source release will allow tinkerers to peer into the guts of RISC OS 5 risk free. To quote Rawnsley: “We look forward to seeing the exciting projects that this makes possible.”

RISC OS has a long and winding history, yet today it is home to software such as the Netsurf web browser, the Artworks design tools, the best-ever source-code editor StrongEd, the OvationPro publishing software, and other applications. Give it a go – you never know, you might even end up contributing a patch. ®