UK.gov should spend more on AI, bleat VCs and consultants. Oh? Why's that then?

That's right, AI report was written by people with skin in the game

Comment Unlike some of the people who invented it, the All Party Parliamentary Group on AI has "no doubts" that artificial intelligence will bring "tangible and practical deliverables" to the UK – if only the right sort of people use it.

Caution about expecting too much from today's AI has been urged by neuroscientist Gary Marcus (PDF), and the father of deep learning himself, Geoffrey Hinton, who suggested last year: "My view is throw it all away and start again."

But it's full steam ahead for the All Party Parliamentary Group (APPG) on AI, which has lent its name to a 2,200-page report today on the state of AI, written for it by two consultancies, the Big Innovation Centre and Deep Knowledge Analytics.

Who? The BIC emerged from the wreckage of The Work Foundation. From 1919 until 2002, this was a worthy self-funding body known as the Industrial Welfare Society, and then the Industrial Society, operating under a Royal Charter. Then, under the leadership of journalist Will Hutton, it attempted to become a fashionable think tank, sold off its training division... and filed for insolvency in 2010.

As for Deep Knowledge Analytics, this is an arm of the venture capital firm founded by Moldovan oligarch and transhumanist Dmitry Kaminskiy, Deep Knowledge Ventures. Kaminskiy famously appointed a robot to his company board, explaining that it could provide opinions "not immediately obvious to humans" and, er, automate due diligence.

The massive survey does not concern itself with where machine learning may be failing to deliver – such as Monsanto's 99 per cent failure rate with over 50 deep learning projects (an interesting number suggesting all but one completely failed, and the other only half-worked).

Instead, it's confident that "the AI revolution is going to be enormous", a "Cambrian explosion". Begone, AI skeptics. "There is no doubt that the nation will see tangible and practical deliverables as a result of these efforts and initiatives over the course of the next several years."

The tone of the report reflects the accelerationist rhetoric we find from Silicon Valley's noisiest tech boosters. For example, one purple passage predicts:

The transition from the Digital Economy to the Digital Economy 2.0 or "Augmented Economy", which have defined as a state in which entirely novel outcomes and values not obvious or projectable by current standards will emerge as a natural product of the evolution of the digital ecosystem.

The report finds room to promote Kaminskiy's transhumanist obsession with life extension. AI can be used as an "accelerative engine for ageing and preventative medicine research and development", we learn from the Exec Summary handed to journalists today. Is that as pressing as UK's rotten infant mortality record – predicted to be twice as bad as the rest of Europe within a decade?

As ever with the consultariat class and today's VCs, there's a plea for more government support (aka funding).

"Government must cement our unique position through investment into AI from all sectors of our economy – science, entrepreneurship, infrastructure, governance, blockchain and skills," wrote Professor Birgitte Andersen, CEO of Big Innovation Centre. However, the report claimed: "Investment in UK AI businesses has now exceeded $5bn (£3.8bn) overall and keeps accelerating." 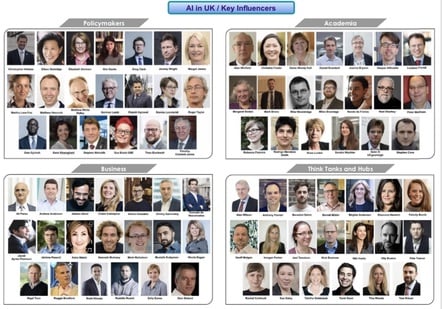 There's a solipsistic nature to the study. It contains "individual profiles of the 1,000 companies, 600 investors, 80 influencers, 35 tech hubs and research institutes, and multiple private and government entities leading the development of the UK AI-industry," as you can see above.

I asked Andersen why, with so many good demands for public funding – from schools, health and valuable social programmes such as drug prevention – the AI chatterati felt they should receive funding. I asked three times and Andersen struggled to answer, so Stephen Metcalfe, the Conservative MP who convened the APPG, jumped into help.

"It sends out a signal and tells the world the UK wants to be a global leader," Metcalfe told me. So more spending meant a brighter signal, I wondered. "Yes, it's as much about the signal as about the actual funding."

Consultants profiling other consultants? It would be rude if they didn't return the favour.

So how's Parliament doing the job of performing dispassionate and expert scrutiny on the claims made on behalf of artificial intelligence? The IT vendors have already inserted themselves in Whitehall: the Ministry of Fun appointed Google's Demis Hassabis to advise.

And last week Pepper the robot was invited "to give evidence" in front of the "Select Committee for the Fourth Industrial Revolution", consisting of a sequence of pre-programmed answers. How did it go unscripted? A bit like this:

Great to have this chat pic.twitter.com/jpRbrWOgFY

And with VCs with heavy AI investments now speaking with the authority of a Parliamentary Group, a sceptic may wonder if the institution has vacated its historical role completely. ®