IBM wants to save Apple sysadmins from wearing out too much shoe leather visiting user desks so it's published its Mac@IBM system provisioning code at GitHub under the GNU Public Licence 3.0.

Back in 2015, IBM trumpeted itself as a case study when it deployed 50,000 Apple devices in the first year of the Mac@IBM programme, and that's the software it's published here.

Speaking to the Jamf User Nation conference this week, IBM CIO Fletcher Previn said the number of Macs coloured Big Blue is now more than 134,000, and when iPhones (90,000) and iPads (more than 40,000) are included, Cupertino will have a 277,000 device footprint in the company.

Because of efforts like Mac@IBM, Previn said, those devices are managed by just 78 sysadmins. 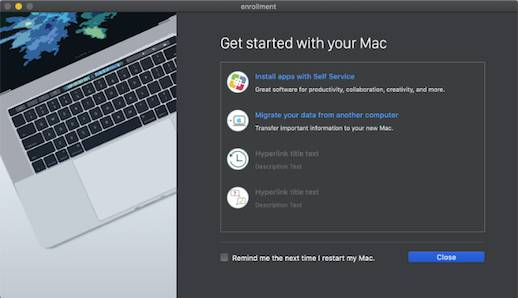 Mac@IBM cuts the sysadmin's workload to get Mac users running

As IBM explained on the software's GitHub page, Mac@IBM is designed to work with the Jamf Pro Apple enterprise mobility management product. "The Mac@IBM enrolment app makes setting up macOS with Jamf Pro more intuitive for users and easier for IT.

"The application offers IT admins the ability to gather additional information about their users during setup, allows users to customise their enrolment by selecting apps or bundles of apps to install during setup, and provides users with next steps when enrolment is complete."

The idea is to let users self-provision as far as possible. Mac@IBM gathers user information, installs a basic set of software bundles, and finishes with education and URL link actions for "next steps and help".

"The application provided is a UI that takes input from both the customer as well as a Jamf event policy script," the explanatory page said.

Once enrolled, the user's machine gets the obligatory reboot, with the chance to enable disk encryption and apply corporate security policies.

Mac@IBM then calls on a Jamf script for bundle installation, and to make sure the UI is updated with property list keys. ®