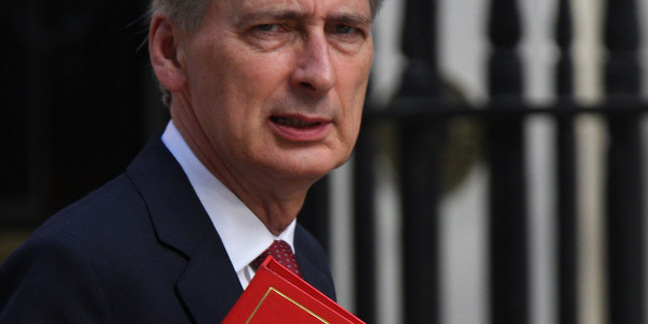 UK chancellor Philip Hammond has used today’s budget to take aim at tech giants who he says aren't paying their fair share of tax in the nation and is promising to introduce a digital sales levy in 2020 to rectify this.

The 2018 budget, delivered on a Monday for the first time since 1962, claimed that austerity is “coming to an end”. To demonstrate this, Hammond outlined a number of cash handouts – although he noted that some of his “star bunnies” had escaped from the hat a little early, in the form of the £20bn boost to NHS funding announced in June.

Among his cash injections, Hammond chucked another £1bn at the embattled Universal Credit programme – which has been beset by delays due to technological and leadership problems. The extra cash is to help smooth migration of claimants to the new system.

He also promised £160m for counter-terror policing and £1bn for defence – which will cover cash for cyber security – as well as various measures to boost productivity, which Hammond said would allow the UK to be “one of the great winners” of the technological revolution.

However, Hammond said that, as the UK evolves for a digital age, “so too must our tax system to ensure it remains fair and robust” – with the key announcement being on digital tax for tech giants.

“There is one standout example of where the rules of the game must evolve now if they are to keep up with the emerging digital economy,” Hammond said: digital platforms delivering search engines, social media and online marketplaces.

Tax rules have “simply not kept pace with changing business models”, he said, adding that it as “clearly not sustainable or fair that digital platforms businesses can generate substantial value in the UK without paying tax here”.

As such, the UK will, in April 2020, introduce a digital services tax on search engines, social media platforms and online marketplaces.

Although the chancellor didn’t name Facebook, Google or Amazon, he did say he was “already looking forward to my call from the former leader of the Liberal Democrats” – Nick Clegg was recently appointed head of global affairs at the Zuckerborg.

The move comes as the OECD is trying to thrash out a global agreement on digital sales tax. Hammond – who hinted that the UK might go it alone earlier this month – said a global deal would be the ideal long-term solution, but that progress had been “painfully slow” and that “we cannot simply talk forever”. EU member states are also pressing for an interim deal as the OECD deliberates.

Hammond said the UK's would be a “narrowly targeted tax” on UK-generated revenues and would not be aimed at start-ups. Rather, only companies that are profitable and generate at least £500m a year in the business lines in scope will have to pay. The first £25m of relevant UK revenues are also not taxable.

The government said it will not be a "generalised tax on online advertising or the collection of data" – and will put a levy of 2 per cent on the revenues that can be attributed to the business models linked to UK-based users.

For example, "if a social media platform generates revenues from targeting adverts at UK users, the government will apply a 2 per cent tax to those revenues".

The exact scoping of the digital services tax – which is expected to raise £1.5bn over four years – and its safe harbor clause to protect those with very low profit margins will become more clear when the government launches its consultation in the coming weeks.

The chancellor also used the budget to confirm that the controversial reforms to off payroll working rules on tax – known as IR35 – will be rolled out to the private sector. However he said that, following a recent consultation, these changes would be delayed until April 2020 and that they would also only apply to large and medium-sized businesses.

Elsewhere in the budget, Hammond promised £1.6bn to support the government’s industrial strategy, which will cover areas such as AI, digital manufacturing, nuclear fusion and quantum computing, and a promise to expand the National Productivity Investment Fund to a total of more than £37bn by 2023/24.

There will be £10m for a scheme to identify ways to keep physics and maths teachers in schools, £200m to trial new approaches to full-fibre roll outs in rural areas, which will start with primary schools, and £12m for new technologies for the fishing industry as part of efforts to clean up the seas.

The government also announced it will mint a 50p coin commemorating Brexit – which the Beeb said would feature the phrase “friendship with all nations” on it. We’re sure that sticking a trite phrase on the third-largest denomination coin will solve all of the negotiating woes in Brussels. ®

Squirrel away a little IT budget for likely Brexit uncertainty, CIOs warned

Plus: 'Member when we modelled sales for Remain? Good times – analyst

Particularly when those projects overrun and overspend