We love Kubernetes, but it's playing catch-up with our Service Fabric, says Microsoft Azure exec

Interview A curious feature of Microsoft's cloud platform is that it has two fundamentally different platforms for microservices. One is based on the homegrown Service Fabric, while the other is orchestrated by the Google-originated Kubernetes, available on Azure through the Azure Kubernetes Service (AKS). Both are open source.

How should developers choose, The Reg asked Jason Zander, the executive veep in charge of Azure, when we spoke to him after his keynote at Microsoft's Future Decoded in London.

Zander's theme at the event was AI and the "Intelligent Edge", including the notion that the huge amounts of data generated by sensors in the field needs local processing and filtering as well as integration with cloud services.

There is massive hype around AI, but also massive fuzziness about what it means for individual businesses. Many businesses are engaged in the more humdrum work of migrating applications to cloud native deployments, about which there is more consensus. Why the big focus on AI?

"We're doing both," said Zander. "We've done a lot of work around cloud native migration. Get your workloads moved, then incrementally evolve. We've done the same thing ourselves with applications like SQL Server and Exchange, for Office 365."

"They are both first-class solutions," he said. "We're heavy users of Service Fabric, even to build Azure itself. We wrote it to support ourselves and then made it available.

"If you're looking for a container orchestrator, especially if you want the integration with the open source community, Kubernetes is an awesome solution for that. What we've tried to do with AKS is to make that first class, we'll do the management for that.

"Service Fabric provides the same container orchestration work but also provides a lot more advanced services on top of that. That includes things like state, highly available state, programming models around that, reactor-style patterns, it has all of those things built in.

"I do expect the Kubernetes ecosystem will catch up and build some of that other functionality. To be honest, they are still about two or three years behind the functionality that Service Fabric has today. We've open-sourced Service Fabric, and 40 per cent of the deployments of Service Fabric are on-premises, not even in the cloud. That also means you can take it to other clouds too if you want, so you do get some portability."

Zander believes that both Kubernetes and Service Fabric still expose developers and IT pros too much to infrastructure plumbing. This is the thinking behind Service Fabric Mesh, in preview, which is close to a "just run my code" model. Mesh automates the scaling and scheduling.

Will Mesh scale to the biggest, most complex applications?

"Yes, because it's already built on top of the same big scale solution. I run Azure on top of Service Fabric. Mesh is the next level up from Service Fabric. Service Fabric gives you the ultimate control, but what we wanted is something that's approachable to a broader range of developers that frankly don't need that level of sophistication for their day-to-day jobs. Mesh just helps you with defaults and scale. Make it automatic. That's the future." 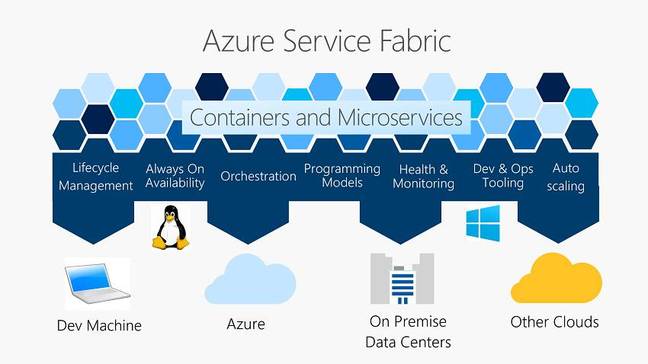 Microsoft has made a big play of its partnership with Red Hat on Azure. What will be the impact of IBM's recently announced acquisition plans?

"Red Hat is very popular on our system but to be honest we have great working relationships and adoption with SUSE, also CentOS and others. All the Linux variants are up and running," said Zander, seeming now to downplay the importance of Red Hat.

"We have a great partnership with Red Hat, because we have a huge mutual customer base. I don't think that's going to change. It's news, and we're waiting to see what kind of work they want to do in future, but we're still eager to partner together."

IBM and Red Hat, Microsoft and GitHub: both are examples of commercial tech giants embracing open source. How important is open source to Azure, and where is Microsoft drawing the line?

"I've been with the company a long time," said Zander. "Coming from the developer division, one of the first things that I did was Iron Ruby and Iron Python, and I shipped JavaScript open-source libraries with Visual Studio. Over the last several years, becoming a first-class member of the open-source community has been a focus for us. One of the biggest things we have open-sourced is .NET and all the .NET Core stuff is there. We did also open-source Service Fabric, which is a huge code base."

Like other companies, Microsoft is "figuring out what are the bars, how does that work", said Zander, in respect of open source versus proprietary code and retaining a sound business model.

Azure and the competition

Microsoft once liked to say cloud was a two-horse race with AWS. Now with growth in Google Cloud, and IBM's story improving, that no longer seems plausible. Does that make Zander uncomfortable?

"I welcome the competition. Analysts say that Amazon had the first mover advantage and have got a leadership position, but I always find Azure right behind it.

"I still find that when I go in to do competitive bids and talk to companies, I often see Amazon and us are in the running.

"The other thing where I've seen industry momentum is around hybrid. Hybrid has been part of our solution since day one. That's one of the key differentiators we've always had. We're watching the industry start to catch up.

"I also think it's going to be hard for a lot of companies to find they've got a company that is providing them with technology on the one hand, but then turning around and competing with them on the other. There's a point when you start asking yourself, why am I funding a competitor? It's another difference in our business model."

Talking to Microsoft's partners at the Future Decoded exhibition, a different take on this is apparent. A large part of Azure business is driven by Microsoft-platform companies taking advantage of cloud but staying with familiar technology and relationships. Hybrid is part of that story. It is still no small achievement that Microsoft is keeping pace, rather than seeing its business bleed away. ®