Micron has started shipping its 2.5-inch 5210 ION flash drive, positioning it as a 10,000rpm disk drive replacement offering much better read access performance for more or less the same price.

The drive was first announced in May.

This disk replacement drive has a low-speed (again, for flash), 6Gbit/s SATA interface – no NVMe here. It is heavily optimised for reads over writes, with up to 90,000/4,500 random read/write IOPS; it does random writes at just 5 per cent of the random read speed. 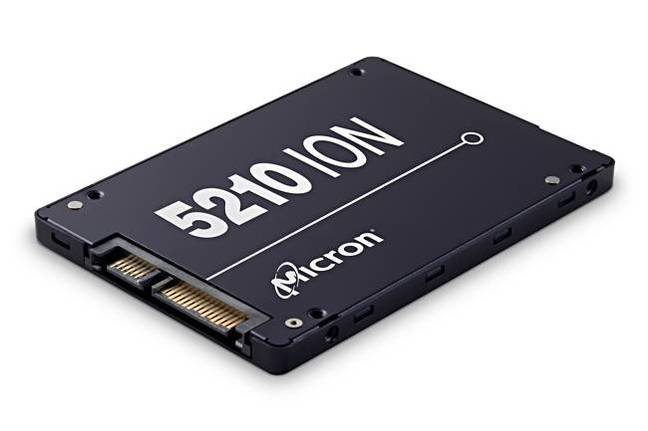 NAND I... will always love you, says Micron as it emits 7.68TB QLC SSD

As a flash drive it is S-L-O-W, but QLC flash is inherently slower than TLC (3bits/cell) which is slower than MLC (2bits/cell) and SLC (1bit/cell) flash. Micron could use a faster interface but doesn’t need one for the disk replacement market it is pushing the 5210 ION into, namely: read-intensive applications such as artificial intelligence, machine learning, deep learning, real-time analytics, big data, business intelligence, NoSQL databases, object stores and media streaming.

Micron corralled a quote from Gautam Shah, CEO of Colfax International, an HPC and enterprise solutions outfit: “We found that a 2.3TB, 100,000 image dataset took 15.17 hours on our HDD platform while the Micron 5210 ION completed the same task in just 1.87 hours, resulting in 13 hours of savings on an every day task."

That's fair enough, but a tad misleading, as Shah's test compared the 5210 ION against a slower 8TB Seagate 7200rpm HDD, and not a 10K drive.

There's more information and specs on the 5210 ION here. ®