Astroboffins spot one of the oldest, coolest stars in the universe lurking in the Milky Way

Ancient light source may last trillions of years before dying 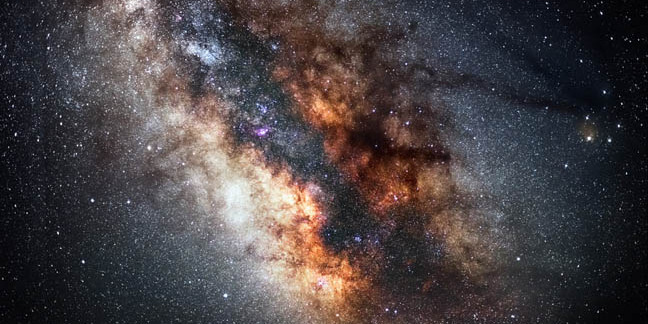 Astronomers claim to have found the oldest star yet discovered – a 13.5-billion-year-old sun hovering on the edges of our Milky Way, according to a new study.

The star may sound unremarkable, 2MASS J18082002-5104378 B, but its contents are pretty special. It’s classified as an ultra metal-poor star (UMP) and is “the most metal-poor thin disk star system by a considerable margin,” according to researchers from John Hopkins University, Carnegie Observatories, United States and Monash University, Australia.

Composed of only hydrogen, helium, and a little lithium, the tiny star is almost entirely made out of the matter that formed shortly after the Big Bang, an event that is estimated to have occurred some 13.7 billion years ago. The team believes the star was born just 200 million years after - a mere speck in the cosmological timeline of events.

Since the star is so old, it could mean that its galactic neighbourhood, a small slice of the Milky Way, is at least three billion years older than previously thought. The results have been published in The Astrophysical Journal (here is the free arXiv version).

"This star is maybe one in 10 million," said Kevin Schlaufman, lead author of the paper and an physics and astronomy associate professor at Johns Hopkins University in the US, earlier this week. "It tells us something very important about the first generations of stars."

Does my corona look big in this?

The majority of ancient stars were likely giants, he said. Stars are born when interstellar gas clouds collapse and the more mass a cloud contains when it starts falling into itself, the larger the mass of stars it produces.

Hydrogen is a poor coolant, so early gas clouds were very hot – up to 1,000 kelvin (700 degrees Celsius). This heat means that the cloud's molecules have more energy, and thus squirm around more, and so it takes more mass to form a star. Stars produced from these early clouds were big, metal-poor and had short, violent lives.

Larger UMP stars are relatively common; astronomers have found 30 of them with a mass equivalent to the Sun’s. But until now it was unknown if old, small, metal-poor stars could exist and 2MASS J18082002-5104378 B shows that it may be possible after all.

The new star is only about 14 per cent the mass of the Sun, and has the same heavy metal content as the planet Mercury. For comparison, the Sun has a heavy element content equal to 14 Jupiters, indicating it was formed of much older stellar debris which has a higher proportion of metals and heavier elements.

One bonus is that stars like 2MASS J18082002-5104378 B have incredibly long lifetimes. Scientists believe such stars, which have about 0.075 to about 0.50 of our solar mass, can theoretically last for trillions of years.

"If our inference is correct, then low-mass stars that have a composition exclusively the outcome of the Big Bang can exist," said Schlaufman, who is also affiliated with the university's Institute for Data Intensive Engineering and Science. "Even though we have not yet found an object like that in our galaxy, it can exist." ®

It's the largest dwarf galaxy to smash into us yet found