Aw heck. Put away the party poppers. The storage is soldered to the board 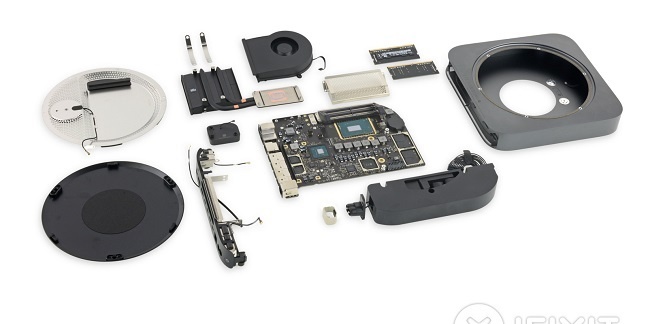 The once humble Mac Mini has received the iFixit treatment following its long overdue 2018 refresh, and the verdict? The dinky box might just be the most repairable machine in the whole line-up.

Apple’s Mac Mini has languished at the back of the cupboard for a few too many years, a situation that Apple resolved in its most recent launch with CPU, RAM and storage updates a-plenty. And, of course, a suitable Apple price to match.

Earlier Mac Minis benefitted from a modular approach, which made the things relatively straightforward to upgrade. Indeed, I have a 2012 edition on my desk that even my fat fingers managed to upgrade to 16GB and an SSD with relatively little drama.

For 2018, some of that upgradability has gone. But taking the thing to pieces remains relatively drama-free as the iFixit team discovered.

The case is little changed from earlier models, with Apple resisting its innate desire to go stupidly thin or light. This means there is plenty of space for useful ports, as we observed last week.

Getting into the case is little trickier than my 2012 version, requiring an opening tool to prise off the base a la 2014’s vintage. Sadly, twist-off covers are now a thing of the past.

Once in, however, it is business as usual. A hulking fan covers the innards of the machine to keep all that new silicon cool. Alas, the logic board is entirely hidden beneath it, but removal is straightforward enough. The board can then be slid out with merely a determined thumb push, casting minds back to happier times when devices could be dismantled without requiring specialist screwdrivers or guts with a guitar pick.

The logic board reveals a return to SO-DIMM RAM which, after soldered-down silicon, is to be celebrated. This part of the machine, at least, can be upgraded.

The rest of the news is not so good. The storage and quad core i3 CPU are both soldered firmly to the board, and so cannot be upgraded. Also on the single logic board is the Apple T2 chip to handle security duties among others.

Removal of the power supply and port module presented few problems, and the iFixit team noted the power had jumped to 150 watts in the new model.

Overall, the Mac Mini maintained its 6 out of 10 repairability rating. Apple received a big tick for moving back to upgradable RAM, but lost marks for its decision to make the storage less so.

While four USB-C ports mean that plugging something in externally is an option, it remains a shame that some of the space in the case could not have been used for more modular storage. ®