My hoard of obsolete hardware might be useful… one day

But no more Bradford Exchange collector plates, I beg you

Something for the Weekend, Sir? Raindrops on roses and whiskers on kittens. Internal hard drives with dust, fluff and shit on. Bundles of CAT5 all tangled like string. These are some of my least favourite things.

Regular readers will know that I have banged on before about our shared tendency to hoard bits of hardware that we don't need. That is, we don't need them until we dispose of them. Experience has proven time and time again that within a week of ditching a long-shelved hunk of plastic and electronics, you will suddenly have an urgent use for it.

This has happened to me so often that I can no longer attribute the phenomenon to coincidence. Thrown away that useless old NAS drive casing? A departmental manager will very shortly knock on your door and demand one. Think you'll never need those massive SCSI cables ever again? The day after they've gone, I guarantee a client will call up in a panic wondering whether you have any. Surely no one needs any of that Firewire gear any more? Well, you won't until you throw it away, whereupon a queue of colleagues will form at your desk asking how to download "critical" video from 20-year-old DV camcorders.

My conclusion is that it's all part of their plan. The next time you cart an old piece of kit to your recycling centre, prick up your ears: you might hear it chuckling, "Heh, just you wait..."

This just-in-case hardware trap came to mind again this week when a colleague uploaded to Facebook a photo of an external 3.5in floppy drive he'd just rediscovered at the back of his den. Practically everyone else in the group fired straight back: "Oh yeah, I've got one of those".

His was in black plastic. Mine is in grey with coffee-and-Marmite dappling. I last made reference to this ghastly, driver-dependent and therefore useless gadget at the beginning of the year. I still have it.

Let me make clear that I do not want this stupid floppy drive. It has no value and I am not fond of it. I wish I could be rid of it, along with boxes and boxes of other such junk.

But therein danger lies. On Monday, someone will inevitably call me up in desperation, offering to pay me "any amount of money" if I can rock up to their door within the hour brandishing a coffee-and-Marmite stained USB floppy drive. Oh, and they'll double the sum and pay in cash if I also have a couple of rope-thick, 1990s-style SCSI cables going spare.

Does this make me a hoarder? Perhaps I am. However, I'd like to think I still have a way to go before ballooning into a smelly, fat loon whose fridge contents are so old that they receive birthday cards. No, I don't think I've yet reached the stage when my stack of partially dismantled hard disks and obsolete iPad cabling causes a house-clearance professional to stagger out of my office, retching and muttering "Holy smokes".

Naturally, I worry about Melinda Gates.

In a new book entitled What We Keep: 150 People Share the One Object that Brings Them Joy, Magic and Meaning, Mrs Gates talks in glowing terms about her cherished Apple III. She says it was a gift from her father, a NASA employee, but further reading reveals that it was originally intended for shared use by the whole family. The teenage Melinda simply nabbed it for herself and carted it off to her own bedroom. She then lugged it over to Seattle when she got a job at Microsoft, and has hung on to it ever since.

Classic hoarding behaviour if you ask me. No one is going to tap at her door and ask her to look through a Visicalc spreadsheet or challenge her to a Tic-Tac-Toe championship. It is not useful and has no value except to a museum, or to fellow hoarders.

No, she keeps this item because she loves it.

And if you have ever wondered what might happen if you combined a hoarding mania with criminal tendencies, you get the notorious Cambrioleur de Niort. This 54-year-old French nutjob was a career burglar who would break into houses and steal... everything. And when I say "everything", I mean it: not just cameras, credit cards and jewellery but clocks, ornaments, broken toys, pots and pans, open bottles of wine, cheap framed prints, moveable furniture, door handles – the lot.

He was so obsessive about amassing other people's possessions that on one occasion, having sold the burgled contents of a house to a "fence", he returned that night and burgled the stuff back again.

I wish I'd known about this bloke when I had to hire a home-clearance company to empty the parental pile a few years ago. It would have been cheaper to mail the address to Le Cambrioleur de Niort along with a Budget Van Rental voucher and a set of house keys.

When he was eventually nabbed and dragged in front of the beak earlier this year, reports say that it took the magistrate half an hour to summarise the inventory of the stolen goods they found in the burglar's Ali Baba-esque garage. When the magistrate finally finished reading out the list, he received a huge cheer and round of applause from those in attendance, prompting the judge to shout something boring about a courtroom not being a circus.

This puts things in perspective. I don't believe I'm quite at the stage where I begin breaking into your spare bedrooms to steal your crate of Nokia phone rechargers, DVI cables or Iomega Zip drives. Your door handles are safe too.

Nor will I be taking any collecting advice from Mrs Gates, given that eight years ago she told a New York Times interviewer that she'd never allow an Apple product to cross her threshold. When asked whether she'd allow her own kids to have an iPod or iPad, she said "of course not" and claimed to own a Microsoft Zune instead.

That's right, one of these must-have, brick-thick hunks of junk: 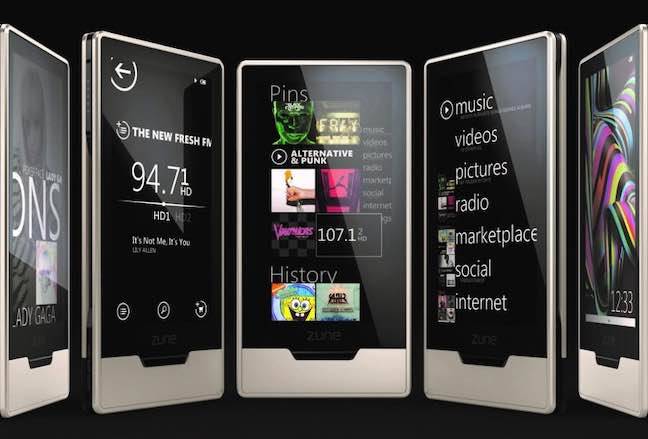 I suppose it's possible that she keeps the Zune in the same packing crate as the Apple III (which I must assume she had helicoptered in through a skylight to avoid it crossing the threshold) but almost certainly for very different reasons. After all, the week after she chucks the Zune in the bin, someone will be sure to ring her up asking if she could lend them a really shit portable media player.

Looking around me, there's nothing among the hardware I want to keep for its emotional significance. I wish it would all go. In fact, that's precisely what I'm going to do right now. Come on, Mme D, let's attack the attic!

Hang on, I might need the gigantic roll of bubble-wrap. And put that box of 1970s vinyl Bowie albums down. And that fretless bass guitar I haven't touched in 20 years. Well, they're my things and I'll decide when I'm ready to throw them away.

Alistair Dabbs is a freelance technology tart, juggling tech journalism, training and digital publishing. Seriously, though, he has a deadline for clearing the house of as much non-essential stuff as possible, in order to minimise storage unit costs. However, he won't say when the deadline falls or why he has one. @alidabbs