Don't expect one in your mobile phone any time soon, admittedly

Video British boffins have developed a self-contained and tamper-proof "quantum compass" that doesn't rely on GPS signals to provide a highly accurate measure of where it is in the world.

The compass is a quantum accelerometer that is capable of measuring tiny shifts in supercooled atoms and so calculate how far and how fast the device has moved. Stuck on a boat, it would mean that the captain knows exactly where his ship was without having to rely on orbiting satellites.

The system has been designed by boffins at Imperial College, London – who developed a laser system for cooling atoms down – and at photonics and quantum technology specialist M Squared - which developed another laser system to act as an "optical ruler." Their work has been funded by the UK's Ministry of Defence. 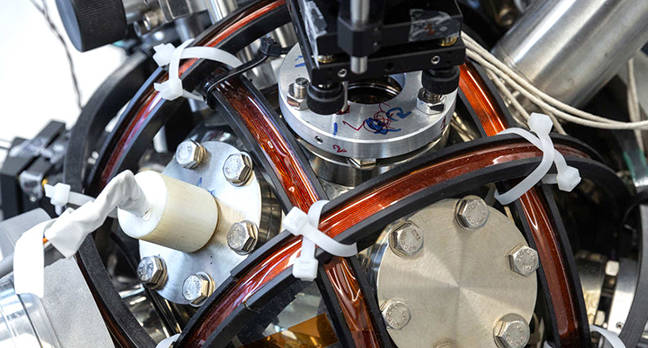 Although GPS satellites are a modern marvel and are used by just about everyone to identify their precise location the fact is that the system is not perfect.

A phone's GPS is accurate to roughly 15 feet, although military GPS devices can be accurate to centimeters. Then there is the fact that tall buildings will often throw a signal off and signals can be impaired by any large, dense object.

But that's not why the Ministry of Defence is interested in a quantum compass: its concern is that the GPS system is vulnerable to attack or deliberate disruption. A GPS signal could be spoofed or blocked for instance. When you're thinking about nuclear submarines, it's usually best to consider the worst.

"Pirates are now sophisticated enough to cause disruptions to ships, and lure them to rocks or take over and board them, by disrupting GPS," said Graeme Malcolm, the CEO of M Squared.

"They can be an even bigger issue in areas of defense and security, where the resilience and security of cities, countries are impacted. This new device is an absolute reference that goes down to the level of atoms."

This is not the first time that accelerometers have been used for navigation but the reality is that such systems are not sufficiently accurate, meaning that as time goes on the system becomes increasingly out of whack and requires recalibration.

Not so the quantum compass, according to its makers. Lasers are used to supercool atoms and then another laser is used to act as "optical ruler" measuring how far those atoms have moved. At extremely low temperatures, atoms behave in a 'quantum' way, acting like both matter and waves.

Here's how Dr Joseph Cotter, from the Centre for Cold Matter at Imperial College, explained it: "When the atoms are ultra-cold we have to use quantum mechanics to describe how they move, and this allows us to make what we call an atom interferometer."

As the atoms move, their wave properties are affected by the acceleration of the vehicle. The optical ruler can measure these minute changes very accurately and then with a few relatively simple equations it is possible to figure out exactly where you are.

The system could be of particular benefit to the UK's military after Europe made it clear that following Brexit, the UK would no longer gain secure access to Europe's new Galileo GPS system despite years of assisting in the system's development and deployment.

But this is not something you're going to find in your smartphone: the prototype system shown off this week in London is about three-feet wide and high and it is incredibly expensive.

Plus it can currently only measure in one plane. The boffins say they will soon be able to take measurements in three planes - making it an entirely independent super compass that can tell you where exactly it is at any point.

But what is does represent is the first practical prototype of a theoretical piece of physics. Presumably the plan is to make it smaller and cheaper over time at which point it could be useful for things like autonomous cars.

"This commercially viable quantum device, the accelerometer, will put the UK at the heart of the coming quantum age," said M Squared's Malcolm.

"The collaborative efforts to realize the potential of quantum navigation illustrate Britain’s unique strength in bringing together industry and academia - building on advancements at the frontier of science, out of the laboratory to create real-world applications for the betterment of society." ®