Huawei Mate 20 Pro: If you can stomach the nagware and price, it may be Droid of the Year

Scrap the HiCrap and UI, and we'd have a winner

Review When, four years ago, I predicted Huawei was coming to eat Apple and Samsung's lunch, derision swiftly followed. Either it couldn't, or it would take a very long time. For years, Japanese and Korean cars were nasty little tin cans, jokes on wheels, remember?

But smartphones aren't cars. The Chinese production miracle, and America's inability to protect its inventions, means that technology is rapidly copied then produced at incredible scale. Google gave away the platform. Thanks, say Chinese engineers. We'll take it from here.

One example is Apple's FaceID, developed at great expense, released on 3 November 2017. And here is Huawei, one year later, with a copy that works as well or better. Huawei does a bit more than just copy, though, so here's something that has eluded Apple and the others: a reliable in-display fingerprint sensor. Just up the Pearl River, BKK's OnePlus has one too. And reverse wireless charging, which means you can top up other people's flagging iPhones and Galaxies from your phone.

These are several distinctive features in the Mate 20 Pro, and some that are unique to the product. Barely six months ago, Huawei introduced a quite startling trick – long exposure shots that emerge from low light without the usual noise and blur that ruin such pictures. Huawei is accelerating and it's quite spectacular to witness.

Apple likely made two assumptions with FaceID. It must have thought that with FaceID's absurd overkill of sensors (IR camera, proximity sensor, flood illuminator, and dot projector), Apple would have an unassailable lead for a few years. These things are difficult and expensive to copy. And the more obvious alternative, under-glass fingerprint recognition, was years away. Both assumptions turned out to be false. Huawei includes both here (iFixit's teardown reveals an array identical to the iPhone's).

But is the Mate a worthy rival to Samsung and Apple, or a collection of dazzling technology gimmicks? Read on to find out.

There are five very different Mate 20s, four once you exclude the Porsche-branded oligarch model. The "regular" retains the "station wagon" design language of the previous Mates, while the Lite is an attempt to squeeze what it can into a sub-£400 chassis. At the top of the scale is the ludicrously large Mate 20 X, a 7.2-inch monster phablet – bet you haven't heard that word in a while – aimed at gamers.

Think of the Mate 20 Pro as a rapid update of the P20 Pro, a phone intended to rival to the Galaxy S8+, if you like.

The Mate's imaging unit is the most distinctive thing about it

Let's exclude the X and the Porsche Mate. The three remaining "mainstream" models are very different in character, separated by £400 in price, and have only the "Mate" name in common.

The chief difference over the P20 Pro is that the Mate 20 Pro is a little longer, and dispenses entirely with discrete fingerprint sensors, front or back. Samsung pioneered the curved glass display using its own AMOLED panels, and the industry has followed suit this year, maximising the visible area. I found it very like Galaxy-like, but without the notoriously cumbersome sensor placement.

The removal of a discrete, visible sensor really fulfils the look Samsung was after. So almost 88 per cent of the front of the phone is taken up by the sumptuous 6.39" OLED display (up to 1440 x 3120). 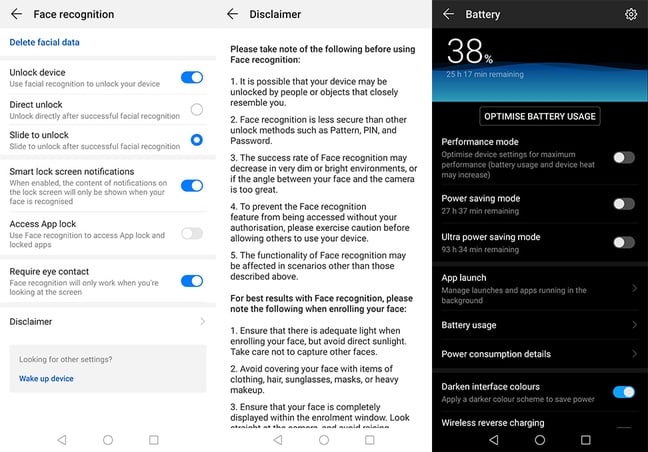 The M20P is the third phone I've used with the under-glass sensor, narrowly beating the other two – OnePlus 6T and Xiaomi Mi 8 Pro to the UK market. All work really well, at least in terms of getting you in, and Huawei's is the fastest. All three require you to press the thumb in a given area under the glass.

Huawei's face unlock was rapid and worked very well too. Just as with Apple's iPhones, Huawei's facial recognition works well in low light conditions and unlocks extremely rapidly. I ended up leaving it on most of the time in my test period.

Unusually, there's no grill. The USB-C port contains the speaker

Biometrics is inherently insecure, and I have seen no statement of how reliable the under-glass fingerprint sensor is from any of the three vendors – whether it can be fooled by tape carrying someone's fingerprint, for example. Perhaps it's a disaster waiting to happen. But the fact all three have been released with it leaves Apple's reliance on FaceID looking peculiar.

The Notch is pretty assertive, only Google with its Pixel 3 has a more in-yer-face cutout. While I don't particularly mind a Notch, I can say that from a week's use a OnePlus 6T (review coming up), with its much smaller "teardrop", is nicer to use.

The regular Mate 20 has a teardrop-style cutout too, as it doesn't have the advanced facial recognition array of the Pro. All Notched phones have the problem of notification overspill, which is plain silly. But then these are increasingly an anachronism: they're now so hard to read. Remember when Windows Phone did away with that top bar altogether? It wasn't the end of the world, was it?

The display doesn't have the rich saturation of Samsung's own panels, but performs very well outdoors in harsh sunlight.

One very clever bit of design is dispensing with the ubiquitous speaker grill. Huawei has built the loudspeaker into the USB-C socket, and it's no worse for it.

Rather than simply aping the others, Huawei has gone for a very fine texture on its glass back, which looks and feels like a vinyl record. Scratch your fingernail over it and it sounds like vinyl being scratched, too. I can't say this made the phone more grippy, as Huawei claims, but it's subtle and not unwelcome.

Anyone looking to use a headphone jack should not look here. The regular Mate 20 sensibly retains it, but as with the P20, it has been omitted.

And one design decision looks either brave or like an error. Huawei is introducing a new memory card format, the NM or Nano Memory card. The idea is great: it's the same size as a nano SIM card, decreasing the size of the electronics required to read it. Unfortunately, we haven't yet seen one in the wild, there's no public spec available, and no indication Huawei is surrendering this through a standards body. And only the four new Mate 20 models (not the Lite) support it. So for now, consider the Mate 20 Pro a phone without removable storage, like an iPhone or a Pixel. Because that's effectively what it is. 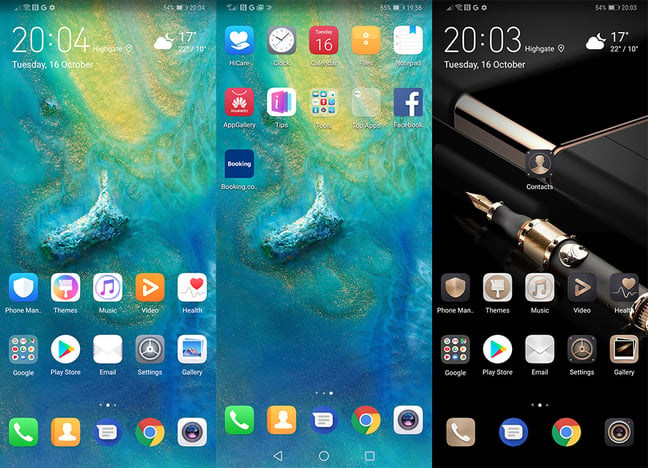 Reviewers, I am no exception, have tended to be quite indulgent of Huawei's EMUI – as in phones like the Honor 7. It was a small part of the overall proposition. That proposition was terrific value, and people can put up with a lot of eccentricity. Now that Huawei not only wants to play with the big boys, at the same price, but give them a knockout blow and claim the champion's laurels, we should judge them a bit more sternly. Here's where Huawei comes unstuck.

EMUI is still sticky and dogmatic, designed to accommodate an ideogram character system rather than a Western alphabet. The settings list is still very long indeed (and reproduced here). The theme engine is mired in the distant past. The home screen still truncates icon labels to one line - unless you download a third-party tool – when you discover it can quite happily display two lines, but Huawei doesn't want to. Samsung's beautiful One UI, revealed last week, has had a lot of thought put into it, and is the second big Samsung UI overhaul in four years. 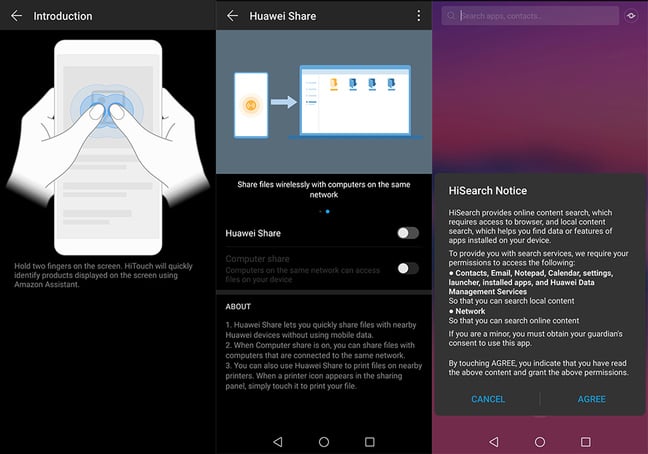 Some poorly explained features are being added. Click to enlarge

But there is more than visuals to a user experience. More than any previous Huawei, this one is marred by requests by on behalf of some poorly explained "smart" or AI feature, asking to see your contacts (no) or your call logs (no) or whatever you're looking at on screen (get lost).

These include HiVoice, HiSearch, some cloud backup service or other, and HiTouch, an object recognition service in partnership with Amazon. If you dare leave HiTouch off, almost any two-fingered gesture will invoke the onboard screens. Off doesn't mean Stay Off.

None of these features really take no for an answer. HiSearch is the good old built-in search function to help you find an app, but now it sends your data off to the cloud somewhere. "If you are a minor, you must obtain your guardian's consent to use this app," HiSearch tells the child innocently looking for the calculator app.

All this is clumsy and aggressive.

To say that EMUI needs a thorough overhaul is an understatement. It's beginning to define Huawei's brand. The British will put up with a lot to boast about their bargain in the pub, but this intrusive and clumsy UI needs to be dumped.

With so much in common with the seven-month-old P20 Pro, there isn't a lot new to add. The gestures experiment continues, with better visual feedback for the "back" gestures (which is swipe from right edge of the display, not one for the left-handed). As I've found with other gesture designs, there's too much of a similarity between "recents" (swipe up and hold) and "home" (swipe up but don't hold). This alone had me back on the traditional navigation bar. Gestures means losing the double-tap to go back to the previous app (a Samsung thing originally) on a Huawei, while OnePlus has been thoughtful enough to give its own gesture.