Western Digital: And when I pull the covers off, behold as NAND becomes virtual DRAM

Western Digital has been using software to turn SSDs into virtual memory so applications are accelerated without having to deploy DRAM or be constrained by memory capacity.

The firm said the Ultrastar DC ME200 is an "optimised" Ultrastar SN200 SSD, which uses planar 15nm MLC (2bits/cell) NAND and is integrated with third-party software. This provides replacement memory management unit (MMU) functionality and virtualizes the SSD to form a virtual memory pool with the host system's DRAM. 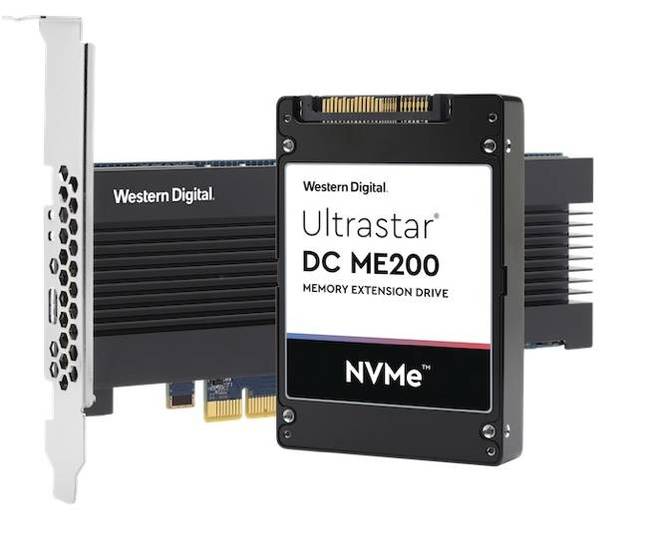 MMUs translate a system software's references from virtual memory addresses to physical memory addresses, typically DRAM. The virtual address space is typically larger than the available DRAM and needed blocks or pages of data are brought into memory from storage devices such as disks or SSDs.

Such paging provides slower data access than if the data were already resident in DRAM. A software MMU can be used to extend the virtual memory pool beyond DRAM to – as in this case – NAND.

The WD software runs as a hypervisor on bare server metal with Linux and application software running above it in the stack, meaning that they do not need to change to use the enlarged (and virtual) memory pool.

The effect is that more of an application's working set executes in virtual memory and runs faster than if it were operating in a smaller pure DRAM memory pool with data fetched from SSDs or disk. Prefetch algorithms help achieve near-DRAM performance.

Eddie Ramirez, Western Digital director of product management, claimed 1U or 2U servers, using the ME200, can extend 1.5TB of DRAM to 12TB of working memory (DRAM + NAND). They scale to the equivalent DRAM levels of 8U servers. Customer situations may well vary but a 1:8 DRAM:NAND ratio seems a good starting point.

The ME200 (ME stands for Memory Expansion) has three capacity levels – 1TiB, 2TiB and 4TiB. The TiB (base2) measure is used instead of TB (base10) because operating systems typically present memory size in TiB. A marketed capacity of 1024.08GB shows up as 953.76GiB.

It comes in either a 2.5-inch (U.2) or half-height, half-length Add-in-Card (AIC HH-HL) formats with an NVMe interface. The drive has a three-year warranty and endurance of 17 drive writes per day (DWPD). That means the 1TiB product supports 19PB written during its lifetime, the 2TiB model 38PB and the 4TiB model 78PB.

Western Digital has been exploring the technology with customers and PoCs for more than a year.

As well as speeding up memory-limited applications, the company said its Memory Expansion drives can be used to consolidate servers CPUs (fewer cores) and/or to reduce the number of server nodes.

Rob Peglar, president at Advanced Computation and Storage LLC, said: "While I fully understand the rationale why WDC is offering such a product (it makes sense for them as a company, given what they manufacture) it remains to be seen if it will be commercially successful.

"There are two aspects that may inhibit its adoption: first, the level of integration of the software into real-world implementations, especially in terms of complexity and usability; and second, Amdahl's Law*. The former is key to any product that carries along its own software, be it a driver, shim, abstraction layer or other code; the latter is the bane of all caching approaches.

"Finally, as for technology, the advent of dense, cost-efficient persistent memory seems to be the optimal path forward to enable significant increases in directly-accessible memory footprint, along with improved access to memory via increasing the number of channels per socket, rather than the approach of diverting memory accesses to a peripheral."

Western Digital may have its technology ducks in a row but the company lags far behind NVMe SSD market leaders Samsung and Intel. We explore its NVMMe SSD market challenges in greater detail in our sister publication Blocks and Files.

Western Digital is consolidating its brand names into two classes: consumer, and enterprise and commercial. The consumer brands will include G-Technology, SanDisk, WD and Upthere.

Western Digital will be the single enterprise and commercial brand, and HGST, SanDisk, Tegile and WD will no longer being used.

The Ultrastar DC ME200 is globally available from Western Digital and its channel partners, and is currently sampling with customers. ®

* Amdahl's Law, named after computer scientist, engineer and entrepreneur Gene Amdahl, predicts the reduction in latency or increased speed of a computer workload limited by a fixed resource when that resource is extended. If some part of the task cannot benefit from the improvement, the increased performance or reduced latency is always constrained by the non-improved part of the task.