HPC supplier Panasas has introduced a faster file system and non-proprietary hardware design in its biggest product refresh for a decade or more. 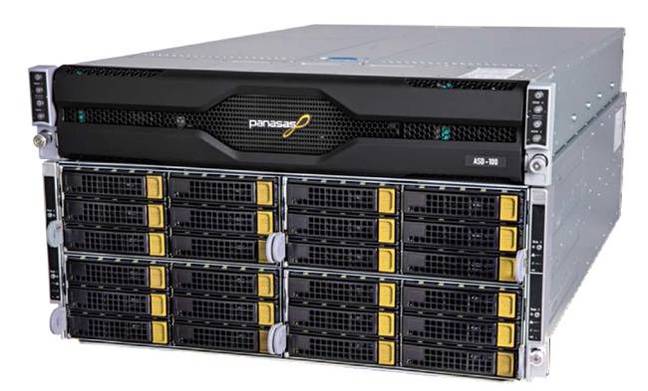 ActiveStor Ultra with Director enclosure on top and storage enclosures below

ActiveStor Prime is delivered with integrated dual 10GbitE networking and external InfiniBand via an InfiniBand router. ActiveStor Ultra uses industry-standard hardware with no proprietary elements, meaning that the ActiveStor software is now, in theory, portable to third-party hardware.

Jim Donovan, chief marketing officer, said: "It gives us the opportunity to port PanFS to other companies' hardware. That's the potential. We're not announcing any OEM deals at the moment."

The 2U Director enclosure has four nodes, each with an E5-1630v4 Broadwell CPU, providing higher metadata and gateway performance than before, a 500GB SSD for local storage, NVDIMM transaction logging, the latest FreeBSD O/S, NIC drivers and 2x40/4x10 GbitE Chelsio NICs.

The storage nodes, four per 4U shelf, each contain an Intel CPU along with network links, HDDs, SATA and NVMe SSDs.

Panasas's PanFS v8.0 software has had a clean-sheet redesign with separation of metadata, small files, and large files for increased performance. It has been ported to Linux to leverage industry-standard hardware, drivers, storage software and databases.

Donovan claimed the automation features make it simpler to use than either Lustre or Spectrum Scale (GPFS).

Metadata is stored in a dedicated database on low-latency NVMe SSDs. Small files, which are an IOPS-intensive workload, are stored on SATA SSDs while large files, representing a bandwidth-oriented workload, are held on SATA disk drives.

Files are accessed in parallel and with distributed erasure coding based data protection. There is a choice of Ethernet, InfiniBand and Intel Omni-Path network links, with different price/performance configurations to choose from.

An ActiveStor Prime offers 1.5GB/sec performance while the Ultra provides 6-7.5GB/sec per 4U enclosure, meaning up to 75GB/sec per rack. Panasas said performance and capacity scale linearly without limitations as more racks are added.

ActiveStor Prime, Ultra and Classic systems can be intermixed in a single overall system, which is called a Panasas realm. 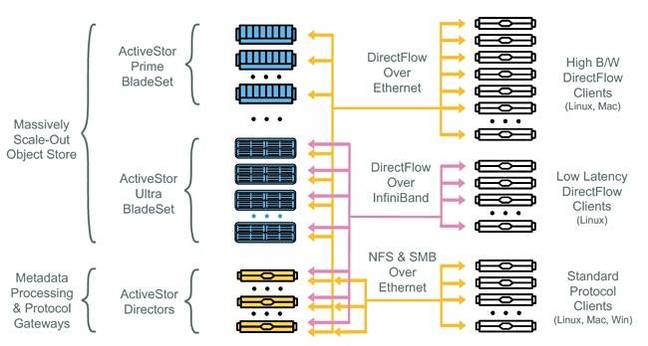 The minimum required configuration for ActiveStor Ultra is three Ultra storage enclosures (to be efficient when striping files across storage nodes) and one ActiveStor Director with four nodes.

The minimum recommended configuration for faster reconstruction performance in case of drive failures is four Ultra enclosures and one ActiveStor Director with four nodes.

ActiveStor Ultra will be available in early 2019, with InfiniBand and Ethernet networking. Omni-Path is coming soon. ®