Like the Raspberry Pi 3 Model B+ but feel that the RAM is just a bit too big, the price too high or the ports too numerous? Fear not, for the spiritual successor to the original Model A+ is here.

Launched today, the Pi 3 Model A+ rocks the same processor as its bigger brother, the 3B+, in the form of a 64bit Cortex-A53 trotting along at 1.4 Ghz. Broadcom supplies the SoC silicon.

Bluetooth 4.2 is catered for along with 2.4GHz and 5Ghz b/g/n/ac Wi-Fi. Power is, as ever, supplied through a micro USB connector with the visuals coming from HDMI and storage courtesy of a micro SD card.

The familiar GPIO header is present and correct, as are the camera and touchscreen ports. The Raspberry Foundation has, however, lacked Apple’s courage and included a port that will shunt out both audio and composite video if required.

It is there, however, that the similarities end. Like the previous Model A+, 2018’s model features 512MB of SDRAM firmly soldered to the board. There is only a single USB 2.0 port, so you’ll need a hub if you want to plug mouse and keyboard into the thing and the Ethernet port has gone. 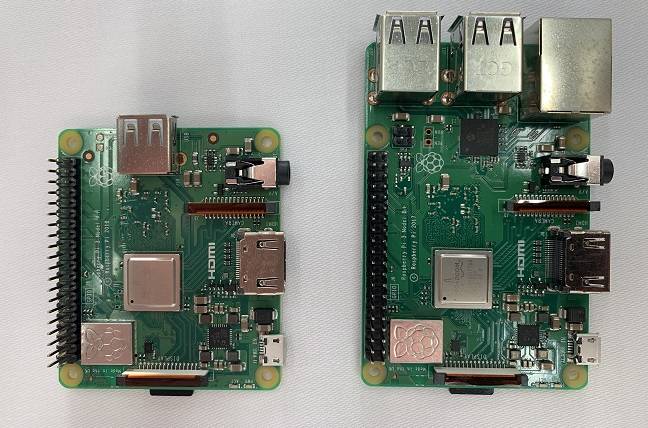 The board is the same size as the original Model A+, shedding the unnecessary PCB where its bigger siblings provide additional connectivity.

Eben Upton of the Raspberry Pi Foundation told The Register the upgraded board was aimed at "space-constrained, battery-powered applications", for example robotics or remote cameras, and where a lack of ethernet would not cause headaches.

The $10 saving over the regular Pi would also prove appealing to bulk buyers, and Upton is reckoning on around 500k of the things leaving the shelves in the next 12 months (a shade under 10 per cent of total production.)

The Reg had a play with a production version and, after a little bit of faffing to get a fresh image of Raspbian up and running, we can confirm that the Pi 3 Model A+ is indeed pretty much identical to the Model B+ in the benchmark stakes. Fortunately we had a keyboard with a couple of USB ports, so the single USB 2 connector presented no issues.

Going beyond tinkering with Raspbian or RetroPie might present some challenges due to the retro quantities of RAM.

At the OpenStack summit this week, Pi fans at SUSE were cheerfully showing off a cluster of Model 3 B machines running as a Ceph storage cluster. The representative responsible for the contraption told El Reg that his hopes for a future Pi would be more RAM and horsepower, rather than less. Indeed, getting anything to run in less than 1GB would be a challenge.

Sorry to disappoint, but according to Upton the Pi 3 Model A+ needs to be dealt with first before "...we can start to think seriously about what we want to put into a future product, and what silicon we might be able to use."

And as for the cluster (which kept on running even after some cable pulling)? “Don’t try and do this”. Good advice, although the sight of stacks of the diminutive computers is undeniably cool.

You can leave your HAT on

Upton did, however, have some good news for those hoping to use Power over Ethernet on the pricier Pi 3 Model B+: "We put the PoE HAT back in the market, with additional output filtering, and the response has been very positive."

Pi user and Reg reader Martin Rowan got hold of prototype of the modification and liked what he saw, reporting back that it appeared to resolve the issues. Upton told the Reg that "Right now this filtering is implemented on a mezzanine board, but in due course we expect this will be integrated onto the main board."

The new Pi 3 Model A+ will remain in production until at least January 2023 and should be available today from your preferred Pi flinger for around $25 plus taxes. The original Model A+ also remains available. ®