China has claimed to have gathered "massive evidence" in its ongoing investigation into Korean chip giants Samsung and SK Hynix and the US's Micron for alleged violations of its antitrust laws.

In June it was revealed the Chinese government had launched a price-fixing investigation against the three semi-conductor suppliers, which supply billions of dollars' worth of memory and flash chips to the Middle Kingdom, and could impose billions of dollars in fines.

The three suppliers, who control around 90 per cent of the DRAM market, confirmed regulator visits to their Chinese offices at the time and deny any wrongdoing.

An FT report has said investigators in China now claim to have found "massive evidence" of antitrust violations by the trio and are looking more deeply into the their affairs in China.

China's pitch is that the three account for 95 per cent of worldwide semiconductor sales and appear to have kept DRAM and NAND prices artificially high in China.

This being China, there are multiple background layers to the story. Firstly, China wants to be independent and self-sufficient in memory and NAND chip supply and has a multi-year, state-backed and subsidised initiative to make that happen. 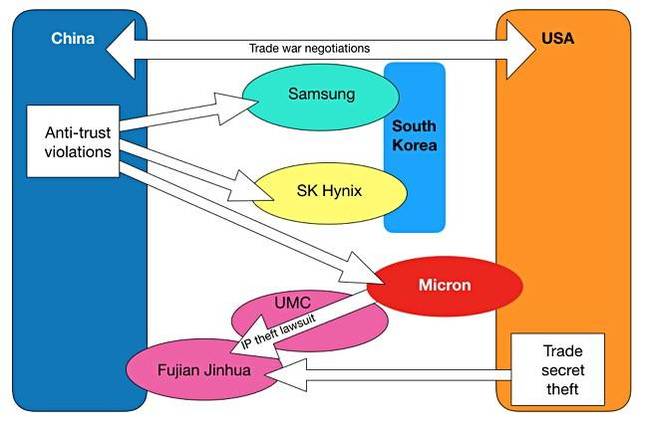 Guess who's getting fat off DRAM shortages? Yep, the DRAM makers

Micron, meanwhile, has sued a Taiwanese corporation, UMC, claiming it stole intellectual property and passed it on to Fujian Jinhua. Separately, the US government has filed charges against UMC and Fujian Jinhua on that matter and banned it from buying US components. ®