Comment Fearing China's growing economic might, the United States is reportedly leaning on foreign companies not to buy Huawei gear.

While Congress and the "security community" worry about, well, security issues, Trump has complained many times about IP theft. China is stealing its way to victory, the narrative goes, and spying on you along the way.

But perhaps the US should look a little closer to home to see how China is gaining an economic advantage. China doesn't need to steal western strategic technology assets – or even copy them – when Google cheerfully gives them away for free.

Google's long-term successor to Android is being developed in public – with source code downloadable from Github. It's called Fuchsia, and was first noticed two years ago.

It's versatile enough to be used for embedded devices like smart speakers – where it may appear first as these don't require a full blown GUI – tablets and phones, as well as PCs (quick overview here). It could even replace ChromeOS and Android when it matures, should Google wish. A nice portable framework sits on top.

Since Fuchsia is released under a permissive open-source licence (BSD style) expect the eventual user base to run into billions. Some might be using Huawei devices. This week Fuchsia-watchers who look at the Github source logs noted that Huawei has been playing around with the new platform, getting it to boot on an Honor phone.

Now let's pause for a thought experiment. What if Google had never given Android away?

Android's dominance today is down to several factors: Google was not (then) a competitor in hardware (as Nokia was), and it was easy to code for (being Java). But price and extensibility also had a lot to do with it. 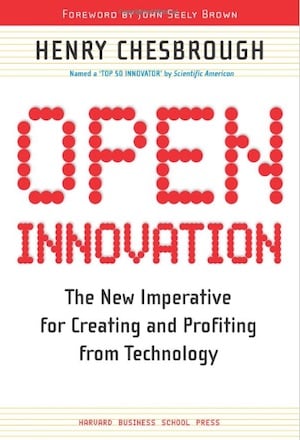 If Google had insisted on charging a competitive market rate for the new Android OS, I doubt it would have emerged from the pack, no matter how extensible and open it is. Being open source does not guarantee success in the phone world, as Symbian and countless Linuxes have found.

Google was following the fashionable business school mantra of "open innovation", popularised by Harvard's Henry Chesbrough. Chesbrough urged companies to look outside for ideas, popularising the phrase in his 2003 book (left). Open source. Open this. Open that. It only encouraged companies to grow lazy and neglect their own R&D. By 2012, business schools like MIT Sloan were throwing up warning signs (PDF).

If Google hadn't given away Android, what would have happened in the smartphone market? It's likely that phone makers would have sourced their platforms from a variety of providers, such as LiMo and Microsoft. But would the world's No.3 and No.4 smartphone makers today be Chinese? Quite possibly not. Chinese companies have shown an excellent ability not only to copy, but innovate on their own. However, writing software that translates outside the cultural boundaries has proved exceptionally difficult. Writing platform software even more so. I doubt many in the West would happily use a Chinese phone in 2018.

President Xi clearly recognised the power of America gifting China an economic advantage when he urged his manufacturers to be more self-reliant. That's a call he repeated again this month.

"Internationally, advanced technology and key technology is more and more difficult to obtain. Unilateralism and trade protectionism have risen, forcing us to travel the road of self-reliance," he said.

It's a decent bet that China will try to make its own platforms. As well as kicking the tyres on Fuchsia, Huawei is already said to be working on its own – just in case.

For now, protectionist Americans, like its deeply learned and scholarly president, may ponder on just how China came to be in such a powerful position.

In mobile, they didn't steal any chickens: Google gave them the farm. ®