See this, Google? Microsoft happy to take a half-billion in sweet, sweet US military money to 'increase lethality' 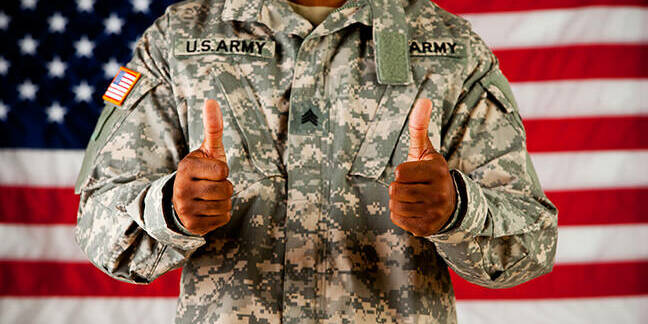 Microsoft has signed a $480m contract to supply 100,000 HoloLens augmented reality headsets to the US military – literally doubling the number of HoloLenses that have been sold since its launch more than three years ago.

The contract signing presumably means someone in the armed services tried the headset on and decided that they wanted to pay money for more of them. Perhaps it was an end-of-year budget-filling acquisition.

The goal is to "increase lethality by enhancing the ability to detect, decide and engage before the enemy," according to an official description of the project and Microsoft is understandably excited about the prospect: "This new work extends our longstanding, trusted relationship with the Department of Defense to this new area," a statement emitted from Redmond revealed.

The purchase is part of the US military's Integrated Visual Augmentation System (IVAS) - a $548 million program approved by Congress that sits in the military's research and development arm. The general idea is to create a system for individual solders that use infrared and low-light detectors to give them greater visibility on the battlefield. The Hololens headset would presumably be used to display the results of such sensors onto a real-time heads-up display in front of the solider.

Or, put more simply, they could see and shoot enemy combatants without having to don bulky and expensive night-vision goggles. The limited range of vision that comes with existing goggles is also presumably what made military chiefs comfortable with the HoloLens' somewhat limited field of view.

It's interesting that Microsoft went for the contract at all given an increasing level of upset among employees of tech companies that their employers are taking money from governments that want to use their handiwork to more efficiently kill other human beings.

Google employees and users were up in arms over the use of AI technology in deadly drones and plans to censor search results in China – a highly secretive internal project. Meanwhile, there hasn't been as much of a fuss over Microsoft's censored version of Bing in the Middle Kingdom nor the military use of its technology. Redmond's president Brad Smith simply shrugged last month that America's fighters deserve the best tech, ie: Microsoft's.

There's a difference between developing automated software to control killer drones, and training human warriors with techno-goggles, of course, but the gap in outrage is striking.

Sure, HoloLens is cute, but Ford was making VR work before it was cool

Having said that, earlier this year there was an internal outcry over the Windows giant's contract with the US Immigration and Customs Enforcement (ICE) department after the White House began separating children from their parents at the Mexican border.

The upset was such that Microsoft CEO Satya Nadella got involved, and sent out an email in which he argued that the company was only doing email and calendars for the government department, and its products weren't assisting in the large-scale child-separation policy.

No, today's lovable Microsoft wouldn't get mixed up in that kind of cruelty. When it comes to augmented reality, though, it seems that any money is good money.

At least Uncle Sam picked HoloLens rather than, say, MagicLeap, which also went for the contract, but failed to win it because, you know, its system is garbage. ®