Talk about a GAN-do attitude... AI software bots can see through your text CAPTCHAs 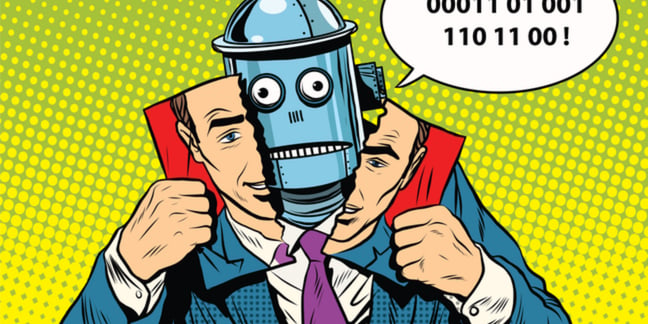 If you're one of those people who hates picking out cars, street signs and other objects in CAPTCHA image grids, then get used to it because the days of text-based alternatives are numbered.

CAPTCHA stands for "Completely Automated Public Turing test to tell Computers and Humans Apart." CAPTCHA tests are used to separate bots from people, as many internet users have seen.

They don't work flawlessly, which is why companies like Facebook are constantly purging fake accounts. And ongoing research into machine learning and image recognition techniques is making it harder still to design puzzles that vex software but not humans.

First described in 2014, a GAN consists of two neural network models pitted against each other as adversaries, one simulating something and the other spotting problems with the simulation until any differences can not longer be identified.

Coincidentally, that's the same year researchers from Google and Stanford published a paper titled, "The End is Nigh: Generic Solving of Text-based CAPTCHAs." Four years on, the speed bumps limiting generic attacks have been paved over.

Can we break it? Yes we GAN!

A GAN turns out to be well-suited for efficiently training data models. It allowed the researchers to teach their CAPTCHA generation program to quickly create lots of synthetic text puzzles to train their basic puzzle solving model. They then fine-tuned it via transfer learning to defeat real text jumbles using only a small set (~500 instead of millions) of actual samples.

Numerous attacks on text-based CAPTCHAs have been devised over the years, the researchers say, but the need to train attack mechanisms to handle specific text-munging techniques has limited how fast attackers can respond to CAPTCHA changes.

"Tuning the attacking heuristics or models requires heavy expert involvement and follows a labor-intensive and time-consuming process of data gathering and labeling," they explain in the paper.

While there have been some generic attacks proposed, they've worked only on relatively simple security features like noisy backgrounds and single fonts.

The researchers contend that by reducing human involvement and the effort to create a targeted CAPTCHA solver, their attack represents "a particular serious threat for text-based CAPTCHAs."

The boffins tested 33 text-based CAPTCHA schemes, of which 11 were being used by 32 of the Alexa-ranked top 50 websites as of April this year. And they were able to crack them in less than 50 milliseconds using a desktop GPU.

Who in their right mind would still be using text-based CAPTCHAs when image-based alternatives are available and Google in October revitalized its reCAPTCHA tech? Quite a few companies it turns out, among them Baidu, eBay, Google, Microsoft, and Wikipedia.

But with object-identification CAPTCHAs also yielding to machine learning-based attacks, it may be time to look beyond Turing tests. ®