MAMR Mia – it's not just WD: Toshiba's popped to the microwave too

Toshiba, like Western Digital, is going to use Microwave-Assisted Magnetic Recording (MAMR) to escape the inability of current PMR tech to go beyond 15-16TB disk drive capacity.

Up to now we haven't known what Toshiba planned to do to increase disk capacity in the future.

PMR (Perpendicular Magnetic Recording) can be roughly thought of as groups of upright rods of magnetism in a magnetic recording medium layer, arranged in circular tracks around a disk platter. Each rod forms a bit. The end of the rod is what is magnetised by a disk's read:write head and the smaller this end area is, the less stable the applied magnetic polarity. As the bit area shrinks, the magnetic value can be altered by temperature changes or the value of neighbouring bits, rendering the disk useless.

The remedy is to use a more stable recording medium, one with a higher resistance to magnetic polarity changes, known as a high coercivity. But that coercivity has to be overcome in order for a read:write head to change the magnetic polarity.

Seagate has chosen to do thus using heat (Heat-Assisted Magnetic Recording or HAMR). Proponents of the MAMR approach say HAMR stresses the disk surface and read:write heads rendering the disk unreliable in the long-term. Seagate disputes this and has demonstrated long life HAMR read:write heads.

Western Digital has chosen MAMR for its future technology and now we know Toshiba is doing the same.

Dr Shiro Saito, a Toshiba corporate EVP, gave a presentation on Toshiba's technology strategy on November 22 and we have seen a copy of his slide deck.

Increasing nearline 3.5-inch disk drive capacity is part of that strategy and MAMR is the chosen technology: 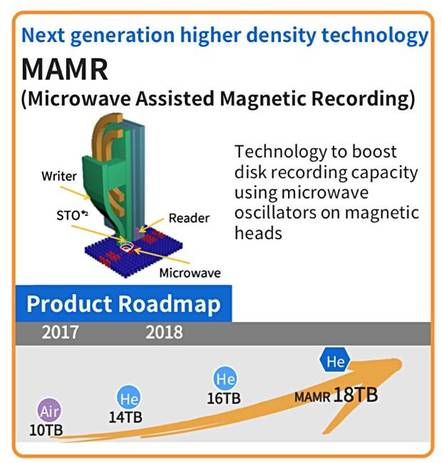 Toshiba MAMR nearline disk drive technology. It's a pity that the timescale on the graph stops at 2018. Click to enlarge

The read:write head has an added Spin Torque Oscillator (STO) which produces microwave radiation. Microwave electro-magnetic radiation has frequencies and wavelengths between 1mm and 1m, and frequencies between 300GHz (1mm wave length) and 300MHz (1m). Microwave ovens use a 2.45GHz frequency or thereabouts and the microwave energy is absorbed by the water content in food, so heating it.

MAMR uses 20 - 40GHZ frequencies and the STO bombards a bit area with a circular AC microwave field, lowering its coercivity and enabling the bit value to be written (magnetic polarity changed as desired.)

It is reckoned that MAMR could lead to 4Tbit/in2 areal densities, beyond the 700 to 1,000Gbit/in2 used currently, and leading to 40TB drives.

Going by the chart above, we might expect Toshiba to produce a 16TB PMR disk drive in 2019 and an 18TB MAMR drive in 2020, assuming the timescale is linear. ®