It doesn't make you invisible, but it could make powerups less painful

Imagine throwing your phone onto a car dashboard or table, knowing it'll power up. And imagine that tabletop or dashboard powering up several randomly aligned devices at once. Above an unassuming street in Oxford, engineers are ironing out the problems. 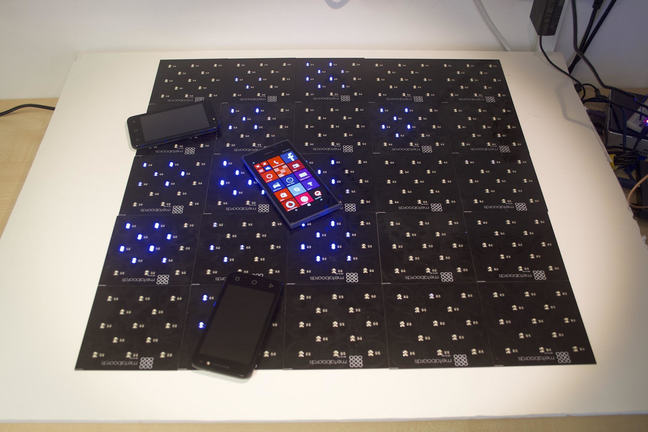 Wireless charging itself is decades old, but as Apple has found out, it's harder than it looks. In September last year it demonstrated AirPower, a pad that could charge three things at once: Watch, iPhone and AirPod earbuds. It still hasn't arrived.

UK startup Metaboards is tackling a slightly different problem: how to charge multiple devices through any non-metal surface without need for alignment or multiple power inputs.

Android Phones are 10: For once, Google won fair and square

It's needed, said MetaBoards CEO Nedko Ivanov, because despite widespread support for Qi – Apple built it into the 2017 iPhones – very few people are using it; Qi remains a niche habit. And that, Ivanov believed, is because it's so tedious. Only when charging surfaces become ubiquitous will people start using them.

The company builds on theoretical work by professors Ekaterina Shamonina, Chris Stevens and Laszlo Solymar over several years into metamaterials. These are synthetic composite materials that have some property not typically found in nature. The best known example is negative refraction, to create a Harry Potter-style invisibility cloak.

Here the quality that attracted investors was not refraction, but the propagation of energy and power signals through a 2D surface that is wirelessly connected.

"In our case the metamaterial is not a new material in terms of nanostructures. We don't make physically new materials. It's the arrangement of them that is important; a structure of normally man-made made elements just small enough for the wave to think its propagating in a normal, homogenous medium," Ivanov told us.

"We arrange them in a custom way to get EM properties you don’t usually find," he added. So unlike, say, a novel material like a graphene, which is difficult to manufacture at scale, the challenge involves using readily available and low-cost materials. "We don't try to change the molecular structure. Making it work is special."

The board is a printed circuit board with coil and capacitors, which do not need to be powered individually. The company plans to license a reference design comprising the cheap boards and proprietary control software to anyone who wants to make a charging-friendly surface. Desks are the most obvious example. Nor does the arrangement need to be flat, like a car dashboard.

"What makes it difficult? Covering a large area consistently," said Ivanov. "You can make a charging surface with a very large coil, but then it starts to resonate itself and it creates a big EM field, which people don't like."

The prototype sample here is for demonstration purposes only – we saw a smaller one and as chief scientist Dr Irina Khromova told us, the substrate can be much thinner.

The surface has to cope with real-world interference such as dropping a pair of keys on it. "Or the fillings from your teeth," the CEO said.

The demonstration we saw used the AirFuel alliance's Resonant technology at 6.78Mhz; dongles are readily available (if you thought the charging wars had ended, they've only really abated). But the know-how to get multi-device charging isn't tied to any particular industry standard – and will be exceptionally useful to anyone who wants to try.

Metaboards received £5m in funding for its work to proceed. Ivanov was previously CEO of Redux, the fascinating UK pioneer that turned a surface into a speaker. It promised to allow phone makers to do away with the large speakers inside a smartphone altogether, and use the display glass to project a beefy sound (it can also simulate button presses). Google snapped up the company. With the smart speaker market exploding, you can see why it was a coveted field to be in.

The company told us it aims to have reference designs that manufacturers can work with in a year's time. ®

Shipments soared 86% in Q1, 200 million expected to be shifted this year

Intelligent Reflecting Surfaces – other IRS that can ruin your day

Wi-Fi 7 had us on 'Extremely High Throughput,' the latency improvements sound nice, too

Apple tipped to go full wireless by 2021, and you're all still grumbling about a headphone jack