IDC numbers show Dell EMC's position at the top of the all-flash array (AFA) market weakened as it grew less than the market as a whole, giving chasing vendors hope – except Hitachi, which managed to fall back despite a growing market.

The analyst said that AFA slingers collectively generated just over $2.15bn in revenue during the quarter, up 39.3 per cent year over year.

As far as shifting arrays, Dell EMC leads, but its growth was lower than that of NetApp, Pure Storage, HPE, IBM or Huawei. It had the leading share a year ago and has retained it. Last-placed Hitachi has fallen back badly - the only vendor with shrinking revenues, and been overtaken by Huawei. The market grew 39.3 per cent – so Hitachi's not the only that didn't keep pace with that growth: IBM, Pure and Dell EMC also failed to keep in step.

NetApp increased revenues faster than everyone else, except Huawei, which is growing from a small base. 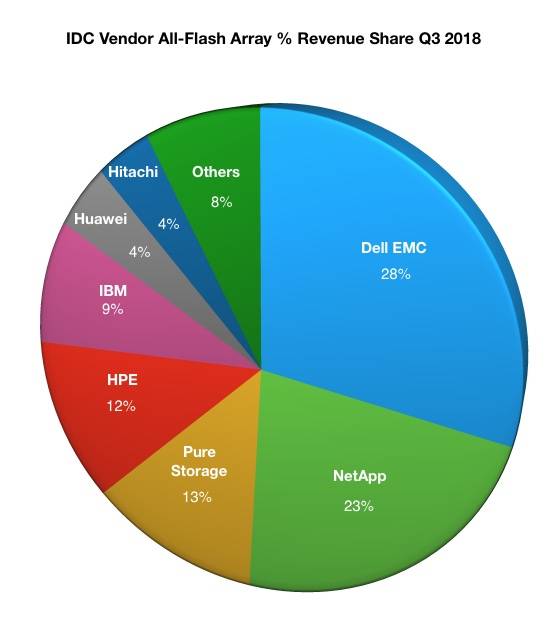 Dell EMC benefited from having four product lines which all grew: VMAX, Unity, Xtremio and Isilon.

Overall the relative vendor positions are stable, with solid customer take-up of all-flash products. It's worth noting that, by way of comparison, the hybrid flash array market is still worth more – it chalked up just over $2.6bn for the quarter compared with AFA market's $2.15bn. However, the hybrid slingers' sales only grew 16 per cent year on year as opposed to the all-flash crowd's 39.3. ®