A wearable crossed with a mobile? Sounds terrible, but it's lovely

Review No phone in 2018 has attracted as much real-world interest, I have found – and its invariable delight and amazement – as the credit-card sized Palm. By, er, ...Palm.

(That's what it's called: Palm. Not Palm One or anything. Just Palm.)

Both Verizon and TCL – the Chinese giant backing the project – both attracted some ridicule when this tiny gem was announced recently, positioning it as "a phone for your phone". Verizon provisioned it as a lightweight duplicate, that allowed you to go jogging or to the gym and still take calls or texts. Vodafone has the UK, German and Spanish exclusives on the Palm, and Voda is taking rather a different approach to Verizon, the first operator to reveal the device.

Although Voda will bring its "One Number" service to Palm to more markets, so you can use it as a shadow or duplicate phone, for now, it's firmly aimed at people thoroughly fed up with the large, heavy attention-sucking monsters that smartphones have become. With a glass front and back, polished metal rim, it reminded me of Nokia's Arte luxury line of phones from the mid-naughties, and looks very classy. And it's absolutely tiny.

We are not kidding you about "credit-card sized". It is only slightly longer than a credit card. The Palm is less than 10cm tall, with a 3.3-inch display. For comparison, it makes the now-discontinued Apple iPhone SE (4-inch display) look gigantic. But then as you can see, we used to think phones this small were clunky once.

It's so small you'll find yourself losing it, or not realising you have it on you. Thank goodness for coin pockets, eh? They've finally found a use. 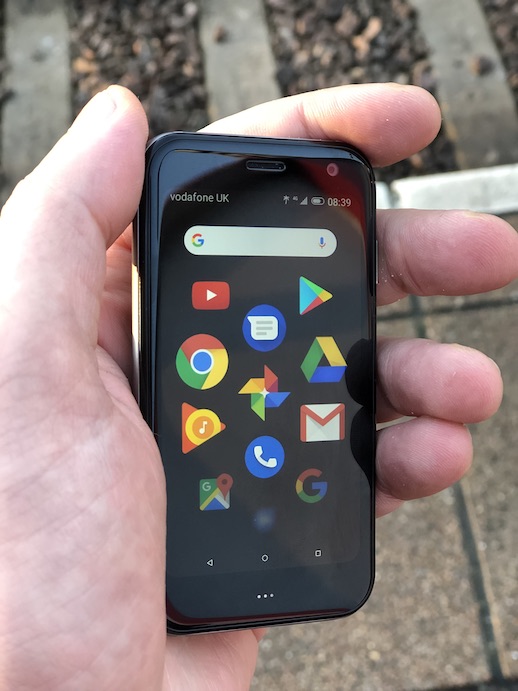 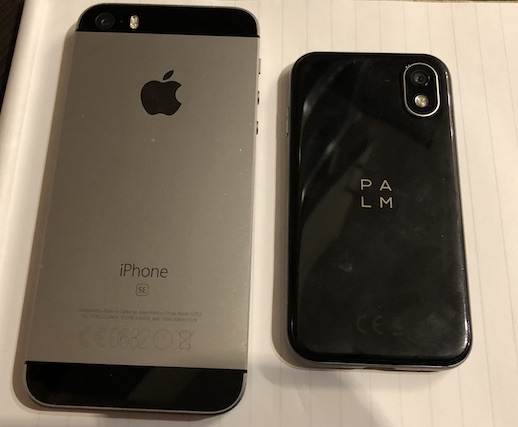 Alongside an iPhone SE 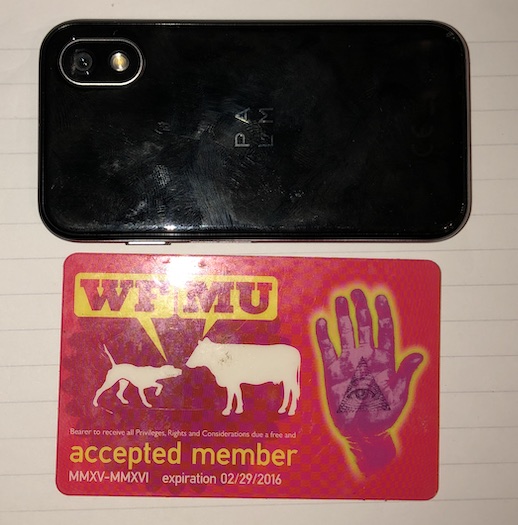 A little longer than a credit card - but not by much 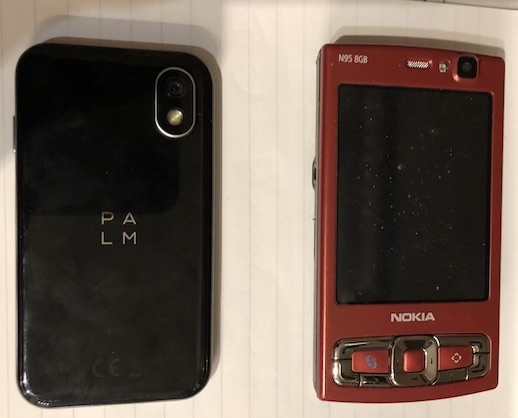 Alongside a Nokia N95 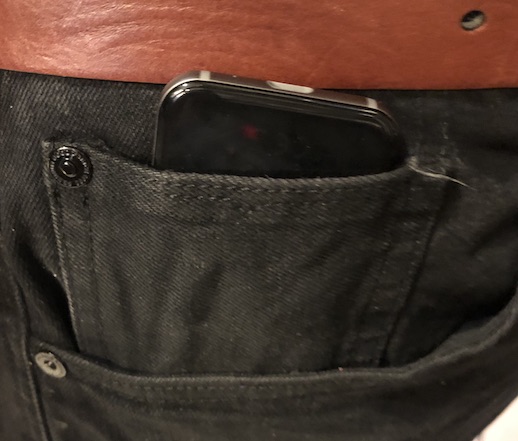 Amazingly, it even fits into the useless coin pocket in a pair of trousers

The third incarnation* of Palm is the brainchild of former Google and Samsung design chiefs Dennis Miloseski and Howard Nuk; the pair previously helped to design Samsung's range of wearables. And that's a big clue to what it's about. Wearables have done well but not really taken off, and many long for the simplicity and small size of the feature phone of yesteryear.

So it's a wearable phone. It's almost like the Derringer of phones, a tiny handgun that in the Wild West era could be concealed in a boot or up your sleeve (or "a gun in a bag of peanuts", for Bond fans. )

In fact, one late-19th century French variant of the Derringer idea was called a "Palm Gun" – but we digress.

The (2018) Palm gives you a full Android experience in miniature. So there's a really quite nice 12MP main shooter, and a surprisingly decent selfie camera. The display is strong and sharp, and was usable in harsh early morning winter light. It is water-resistant to the IP68 standard, as it should be if it's an outdoors-y, "shadow" phone. Palm has removed the traditional volume buttons, so the only button on the frame is the on/off/power button. Sadly, a headphone jack is not included. Nor is NFC, for payments. But there is a microSD card slot.

The software has been tweaked for a 3.3-inch diagonal display. The launcher is a grid of buttons. There's no App List, as you simply nominate which apps fill the list - shortcuts can also fill the slots. The grid has appeal but not annoying transitions, and works very well. Anything else would be daft. But just for the lolz, I did try it with Nova Launcher and Microsoft Launcher, you will find yourself doing this if you have one, just to see what it's like. Anyone for Doom?

Palm makes much of "Life Mode", which is really a glorified Silent Mode, with Notifications suppressed while the screen is off.

Life Mode from Palm on Vimeo. 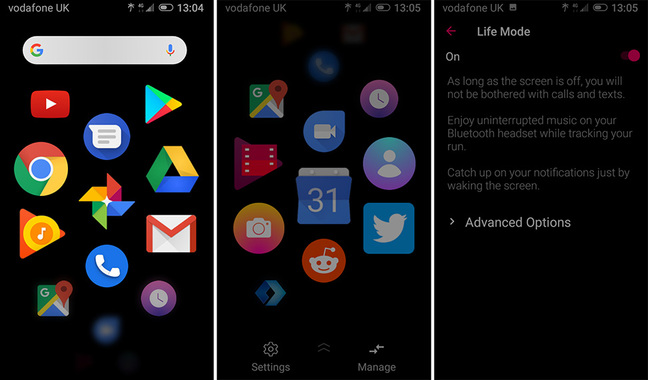 The task switcher is conventional Android 8, where perhaps larger and more distinct horizontal "cards" might work, as on Palm's WebOS or iOS. There's also a nice feature called Gesture Pad that I found maddeningly limited to the Lock Screen. Here you can narrow down a shortcut by making a letter. 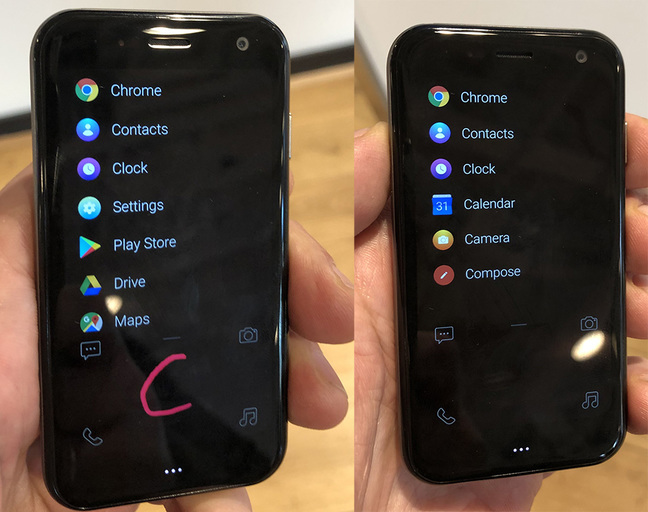 One tweak you'll want to make is to turn off the standard Android Navigation Bar. This is on by default, presumably for reasons of familiarity, but the Palm works much more comfortably when you use the "three dots" bar instead. Double tap to go to the home screen, long press to bring up the switcher, and tap to go back.

So, what's it like? Well, it's surprisingly usable. The small size means poking around on a quite tiny keyboard, but then the swipe gesture typing on Google's Gboard keyboard comes into play, very well. (The Verizon Palm uses Fleksy, which isn't as good as Google at word recognition but has more useful gestures, like "swipe left to delete a word".) Voice is also very useful. And you can use voice instead. I suspect some people would prefer letter typing on the gesture pad as they don't trust either voice or the soft keyboard.

Performance can be sluggish on the Snapdragon 435 (28nm) but for the basics, including the Google Assistant, it's absolutely fine. I suspect the 3GB of RAM helps. Occasionally I found a lag taking photos and I didn't really try and stretch it.

Call quality was excellent at both ends. This is an LTE device, remember.

A point of Honor: Huawei in talks to sell its youth-focused smartphone business – report

Digital China Group, TCL and Xiaomi said to be among suitors in deal potentially worth £2.8bn