An upset tummy and a sphincter-loosening blackout: Lunar spaceflight is all glamour 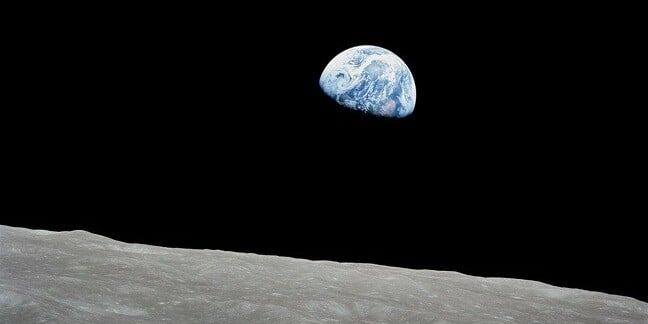 The Earth from the Moon (pic: NASA)

Fifty years ago today, Apollo 8 carried the first humans into orbit around the Moon, ushering in a short-lived period of crewed lunar exploration.

The crew, consisting of veteran astronauts Frank Borman and Jim Lovell, and rookie ‘naut William Anders (making what would become his only jaunt into space) had launched at 12:51 UTC on 21 December as NASA battled delays in its Moon programme and the phantom threat of the Soviet Union flinging a crew at the Moon first.

To the relief of mission controllers, fixes added by engineers aimed at reducing the vibrations (of “pogo”) that had nearly led to the loss of the previous Saturn V launch worked, and the combined stack of the S-IVB third stage, service module and command module were slotted into Earth orbit.

After checking out their spacecraft’s systems, the crew prepared for the crucial Trans-Lunar-Injection (TLI) which required a re-ignition of the Saturn V’s third stage, still attached to the Apollo spacecraft. The S-IVB had failed on Apollo 6, but the smoother launch of Apollo 8 meant this time the single J2 engine fired as planned, sending the stack on a trajectory that would see it eventually captured by the gravity of the moon.

Following the TLI burn, the command and service modules (CSM) separated from the spent S-IVB and performed a manoeuvre to put some breathing space between the spacecraft. The CSM was then put into a slow roll to ensure solar heating would be spread evenly.

The cruise to the Moon was uneventful from a technical perspective, although the crew remained vigilant; it was the first time anyone had attempted this after all. For Borman, however, the more spacious confines of the Apollo capsule (compared to the cramped Gemini) led to a bout of space sickness. Not fun in micro gravity.

Concerned for their commander, Lovell and Anders recorded a message for mission controllers to listen to offline rather than broadcast the fact that Borman was jettisoning his lunch from both ends. Borman, of course, was not the first to experience sickness in space. Cosmonaut Gherman Titov had become unwell in his Vostok back in 1961, but relations between the Soviet Union and the USA meant that NASA wasn’t privy to all the details.

NASA opted to continue with the mission as Borman recovered and, after a few more course corrections, had the astronauts fire up the big Service Propulsion System (SPS) of the Apollo service module to drop Apollo 8 into orbit around the Moon.

Orbital mechanics meant that the four minute seven second burn occurred while the spacecraft was out of contact with the Earth, leaving sphincters clenched as controllers awaited confirmation that Apollo 8 was safely in orbit.

The spacecraft emerged on schedule, confirming that the burn had gone as planned.

The crew spent the next 20 hours orbiting the Moon, taking photos of the surface, capturing the famous Earthrise image and performing the infamous reading from the Book of Genesis.

While the former was inspirational, the latter inspired a reaction of an altogether different kind as the US government was hit by a sueball from annoyed atheists.

After 10 orbits, the crew again fired the SPS engine, again hidden behind the moon. Departure from lunar orbit occurred at 06:10 UTC on 25 December 1968, with Lovell quipping as the spacecraft emerged from the lunar blackout “Please be informed, there is a Santa Claus”

The crew splashed down into the Pacific Ocean at 15:51 UTC on 27 December, ending the first crewed mission to the Moon. ®

Rewriting the checklists: 50 years since Apollo 13 reported it 'had a problem' – and boffins saved the day