Racing at the speed of light, Sage superhero bursts through the door...

...And reveals rather too much to the staffer in the room 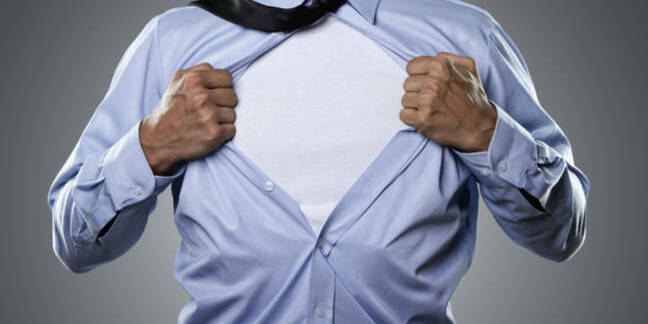 On Call Everyone has had an embarrassing moment, when you wish the floor would just swallow you up. Perhaps yours was at the office Christmas party. But at On Call we like to go one better.

This time, our delve into the readers' mailbox brings out a tale from "Bruce", who writes in to tell us about a serious wardrobe malfunction.

About 15 years, ago, Bruce was a desktop technician and often had to carry out updates for line of business applications like Sage Accounts Production.

On one occasion, he had a call to do just that in a small accountancy practice, where the owner was a "challenging" lady who was "deeply concerned about staff downtime".

Bruce assured her he could get all the prep work done in advance and do the final client-side update over lunch – so no one would be unable to work.

Time for a cracker joke: What's got one ball and buttons in the wrong place?

"It was an old building, so every person had their own office," Bruce said, which meant he had to work fast to get everything done.

"Things were going well as I sprinted as fast as I could from office to office to run the client update on each PC," he said.

But then, disaster struck.

"As I burst through the door into one of the offices at high speed, my shirt got snagged on the door handle," he said.

"I was carrying fair momentum and as I moved forward, all of the buttons on my shirt popped off, as my shirt remained attached to the door handle."

Yep, that's right, our hurried hero had ended up bare-chested in the middle of the office.

But surely everyone was out at lunch, so he could be spared some of the embarrassment? No such luck.

"There was a lady sitting at her desk, eating her sandwich, and she had just taken a bite," said Bruce.

"I'll never forget the expression on her face… and her sandwich all over her computer screen."

Bruce said that after the hysterics had calmed down, he snuck out to his car for his back-up shirt.

"Thank god I always had a spare change of work clothes after one too many 'two minute' jobs when on-site," he said.

But the important thing, Bruce said, is that the Sage upgrade was completed over lunch.

"Even if my dignity was eroded somewhat."

Reg readers who think they can top this clothing catastrophe can write in to On Call's guardian Vulture here. ®