Heard the one where the boss calls in an Oracle consultant who couldn't fix the database? 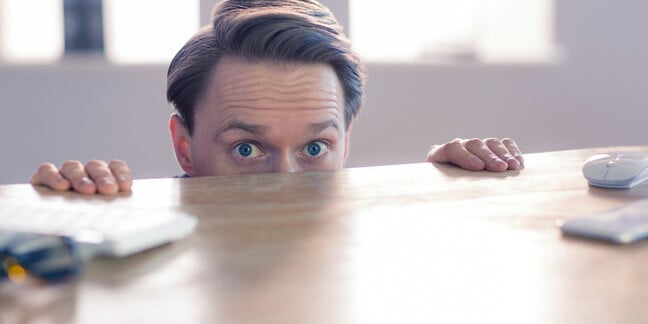 On Call Over the months, On Call and Who, Me? – El Reg's weekly columns of tech support cock-ups – stack up quite a few submissions that are too short to whip into a single piece.

To help fend off those post-Christmas blues and remind you that you do indeed need to return to work soon, we've compiled a list of winning one-liners and shorts to speed you into the New Year.

"My team included people from all around the world and our meetings were always on Lync for those who weren't at HQ. Those who were at HQ booked a meeting room, which were all named after capital cities," Jarvis told us.

"One time, we booked the Vienna room – then had a confused call from the Czech Republic group, who couldn't get through security at the Austrian capital's building..."

"I once sent an email-all at the electronics company where I worked, with the subject field 'Who wants to get high this weekend?'," said Edward. "Unfortunately the content was blank, rather than the invitation to go gliding that I had intended to send."

Another joker wrote in to us on a similar topic: "Many years ago I sent a naked picture of myself to everyone in my address book – it cost me a fortune in stamps."

Performance issues made Warren's company bring in a pricey Oracle consultant to take a look at the database. The consultant suggested setting a parameter, which we'll call Parameter_X, for the database.

Warren asked how that was supposed to help, but was told to keep quiet. Sure enough, the whole pack of applications "ran like a three-legged dog" after that and the consultant was summoned back in. "He pokes around the server, then triumphantly announces, 'Found it! Of course it ran slowly. You had Parameter_X set.'"

"A lady called to say her modem wasn't working," recalled Clyde. "Step one, make sure she's actually talking about the modem. Step two, is it plugged in? A couple of thuds later, 'Oh!' Step three, have a nice day."

Getting one over on the boss

"I once had a boss who wanted us to sit down with two great long Z-fold printouts, and highlight the same items on each so we could see any differences unhighlighted," said Rachel. "I explained I could do it in five minutes by running a report, but was told that wasn't how we did it."

Half an hour later, Rachel pretended to go to the loo and took the opportunity to run the report, returning with it and a coffee for the boss. "He did not explode all over the carpet at my blatant insubordination as expected."

When things could be worse

Clyde again, reminiscing about his first ever call for tech support, said: "An overseas military officer, calling from Germany, asked what he could do to replace his power supply. While I was working away, he suddenly interjected, 'OK, well now it definitely needs to be replaced, it's on fire. I'll call you back'."