Following dinner (more or less like lunch but with the scuttles screwed shut over the wardroom portholes), I wandered back to my cabin to get some work done. Enterprise's senior rates and officers are lucky; unlike many warships, her accommodation is relatively luxurious, with just two people sharing a cabin (sleeping in a bunk bed) and four sharing a bathroom. I was lucky enough to be sharing with a chief petty officer who appeared to work nights; if he was there at all he was usually fast asleep and, thank goodness, not a loud snorer. 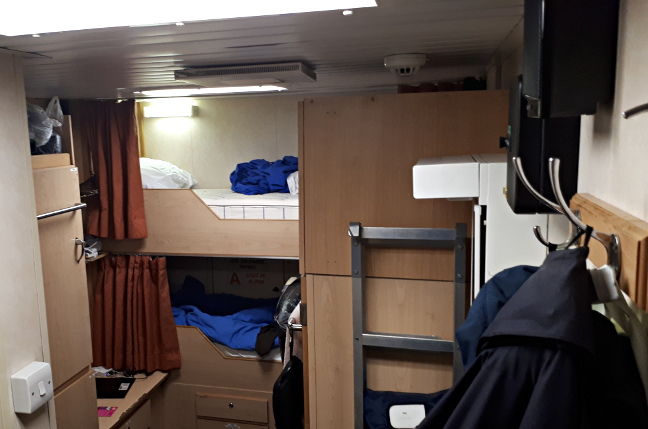 My cabin. Note access door to valve in wall of lower bunk

The bunk bed, I discovered, also had a seatbelt in case of rough seas. Luckily I didn't need it, though the thought of what I'd land on if I was rolled out of the bunk at night had crossed my mind a few times.

Around 01:00 the main broadcast woke me up: "Bridge – the Northern Lights!"

I threw on some clothes, grabbed my jacket and moved as quickly as decorum allowed up the main staircase to the bridge. Half the crew were doing exactly the same thing. And outside on the bridge wing, we saw the Northern Lights coruscating away in all their glory...

We have seen the #NorthernLights! Just amazing, and yet another tick in the #TaskbookOfLife.#AuroraBorealis#ALifeAtSea#MadeInTheRoyalNavy pic.twitter.com/tDdKNXXfAp

That's something you don't see every day in the UK. And here was an entire ship's company getting paid to be there and seeing the beautiful sights of nature.

The following morning brought the usual ship's routine as we approached the port of Trondheim, with everyone a-chatter about the Northern Lights the previous night. 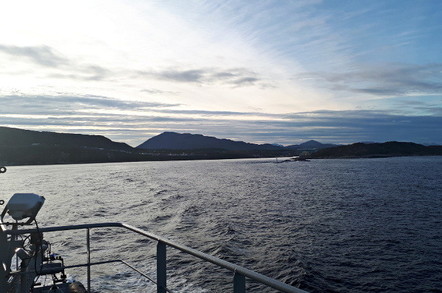 A fjord, as seen approaching port

Coming south into the main channel down Trondheim Fjord, the bridge crew (well, the captain!) were more than happy to show off various navigational techniques, including echo-ranging the steep sides of the fjords using the ship's foghorn. Clear the upper decks, press the horn, time how long it takes the echo to come back, then do some simple sums that give you a very rough estimate of how far away the cliffs are. "Good if everything else has broken down," observed Navs, Enterprise's breezy navigating officer.

"Depth 82 metres, shoalin'!" announced Able Seaman Richards, the cheery Caribbean wardroom steward, who doubled up at harbour stations as the depth gauge monitor, calling out the depth of the water under Enterprise's keel as she came closer to shore. Typical water depths out in the North Sea and the Arctic were in the region of 550-600 metres. 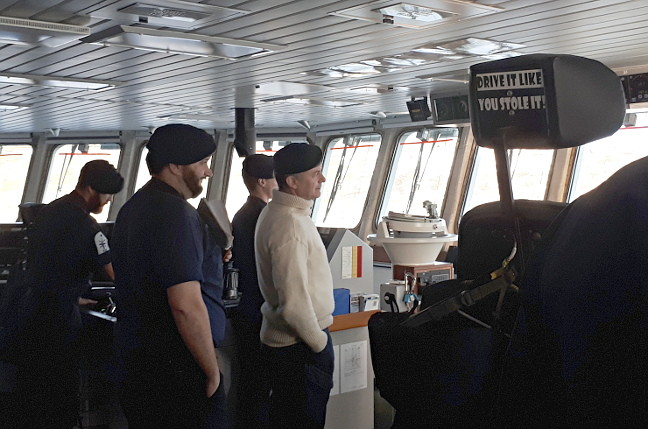 Cdr Harper (a former submariner) is wearing the white sweater. Lt O'Regan, "Navs", stands beside him. And to the right, the captain's chair...

I looked at the harbour tug, quietly sitting about a hundred yards away, as our ship used her azipods and bow thrusters to deftly manoeuvre herself sideways on to the jetty before ever-so-gently slewing into contact with terra firma.

All in all, this was a fascinating, if brief, look at how a British warship's crew lives, works and relaxes while out at sea. Coming at the end of a major NATO exercise (Trident Juncture), it was clear even to me that the crew had been working hard and were looking forward to a week's "run ashore" in Trondheim. 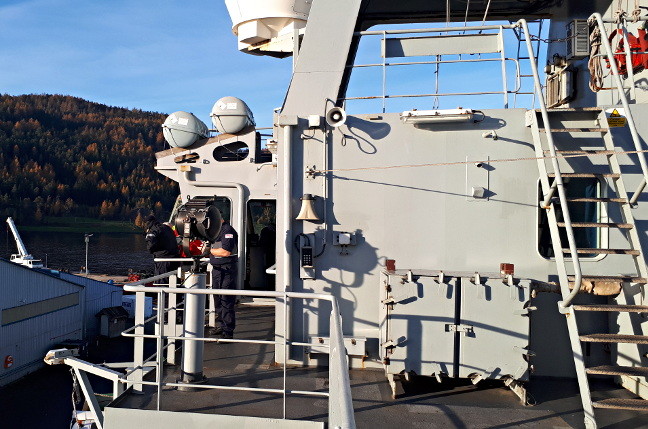 The moment Enterprise was fast alongside, with the gentlest of bumps as her fenders met the jetty

But it also helped bring home another point; without the power of technology, the various software suites (yes, even elderly versions of Windows XP) and endpoints and servers aboard the ship bringing vital information to the ship's company's fingertips, and the processing and exploitation aboard, and ashore, of the data that Enterprise gathers on her duties, virtually none of the Navy's work would be possible.

A large amount of what "we" regard as routine old enterprise IT gear is doing sterling work in demanding environments aboard British ships, aircraft and even in armoured vehicles. Say what you like about foreign policy but the technical achievements of those who design, maintain and update the IT hardware and software that makes these things possible is to be admired. ®

The Register thanks the Royal Navy, the Ministry of Defence and the crew of HMS Enterprise for this unique opportunity, unrivalled in the field of IT journalism, and for keeping your correspondent liberally supplied with wets and dits throughout.