NASA's teenage New Horizons probe has successfully passed within 2,200 miles of 2014 MU69, some four billion miles from the Sun, three years after taking a close look at Pluto and nearly 13 years after launch.

Nicknamed "Ultima Thule" (meaning "beyond the known world"), the object is thought to be a remnant from the formation of the solar system 4.6 billion years ago. Examining it will give more clues as to what conditions were like in the distant past.

Ultima Thule only receives 0.05 per cent of the light Earth receives from the Sun so New Horizon's cameras and stabilising platform had their work cut out. The spacecraft hurtled past, doing 32,000 miles per hour, at 05:33 UTC on 1 January 2019.

The first data back from the spacecraft signalling that all was well was received nearly 10 hours later, along with some early images showing Ultima Thule to be approximately 20 miles long by 10 miles wide and spinning end over end. Scientists have likened it to a bowling pin, although as further, more detailed, imagery arrives, there is a chance it could turn out to be two bodies, orbiting each other at close quarters. 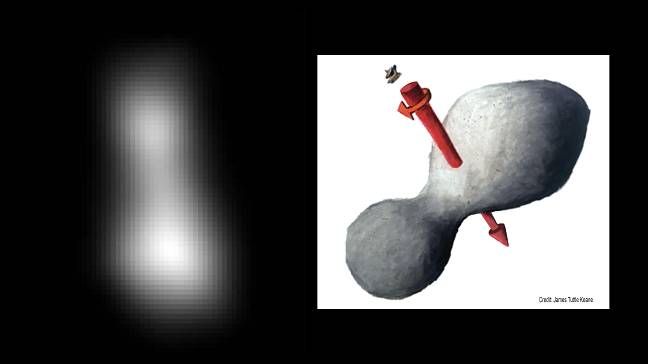 It will take 20 months for the rest of the data to be transmitted back to Earth, and scientists expect the first highly detailed images to arrive in February. With the spacecraft still performing like a champ, the team plans to propose further exploration of the Kuiper belt.

Assuming funding continues, the New Horizons mission could last another 20 years before the onboard radioisotope thermoelectric generator (RTG) finally gives out.

Before then, scientists hope to take a Voyager-style family portrait of the solar system. Whether that happens this year or in the next decade will depend on whether a new Kuiper belt object is selected. Directing the camera back toward the Earth and the rest of the solar system runs the risk of burning out the optics.

The New Horizons spacecraft weighed in at 478kg at launch, of which 77kg was propellant and 30kg instrumentation. Two of the seven instruments onboard account for nearly half of that 30kg; the 10kg camera, nicknamed "Ralph", comprises three panchromatic and four colour imagers and a near infrared imaging spectrometer, and "Alice", an ultraviolet imaging spectrometer with its roots in instrumentation aboard ESA's Rosetta spacecraft.

While Alice and Ralph were named for characters from popular 1950s US TV sitcom The Honeymooners, the rest of the science payload has been given the snappy acronym treatment. The Long Range Reconnaissance Imager (LORRI) provides high-resolution surface images, the Solar Wind Around Pluto (SWAP) instrument, funnily enough, studies solar wind, and the Pluto Energetic Particle Spectrometer Science Investigation (PEPSSI) measures solar particles around a body's atmosphere.

A student-built instrument aboard New Horizons, the Venetia Burney Student Dust Counter (SDC), measures the concentration of dust particles in the outer solar system. Rounding out the suite is REX, the Radio Science Experiment, which is designed to measure atmospheric pressure and temperature. ®