Found yet another plastic nostalgia knock-off under the tree? You, sir, need an emulator 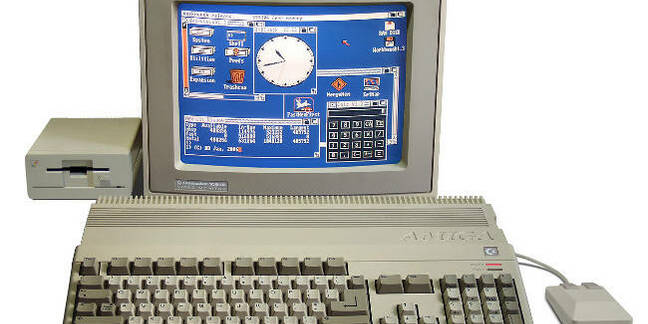 Looking glumly at that hunk of retrocomputing-esque plastic you got for Christmas? Realised that the keys on that mini Commodore 64 were just there for decoration? Fear not, for classic Commodore botherers, Cloanto, have just the thing.

Lovers of retro kit, lacking the desk space to set up their prized '80s memorabilia, or the patience to coax one of the many free emulators into life will be delighted to learn that fresh versions of Amiga Forever and C64 Forever dropped on the last day of 2018.

First released in 1997, Amiga Forever is effectively a front end for a variety of emulators of the venerable kit and saves the user from the hassle of configuring the likes of WinUAE and WinFellow and tracking down the necessary ROMs to make the thing work.

€9.95 gets you the Value version, with emulators and the Kickstart 1.3 ROM files. Dropping another €20 gets the version 3.x ROMs among others and some extra games (50, rather than 25.) The warm fuzzy feeling of getting hold of official images comes bundled with the price, as does the saving of have to hunt for a more nefarious source of the chippery. The bundled games? More a convenience.

Cloanto is rightly proud of the 600k or so lines of code it has written to glue the various emulators and plug-ins together – using the thing is blessedly simple compared to the pain of other approaches. Version 8 adds improved virtual mouse and keyboard functionality into the mix as well as support for some of the High DPI features unleashed on users in recent versions of Windows 10.

I naturally took the latest version of Amiga Forever out for a nostalgic test drive, having owned a 500 and then a 2000 in the '80s after my old TI99/4a was finally put out to pasture. As one would expect, setting things up was simple and the list of Amiga variants (including the disastrous CDTV and the Amiga 4000 I really wanted when I finally moved into the land of PCs) is impressive.

Compatibility was equally impressive (as it should be, considering the components doing the work) and Amiga Forever handled pretty much whatever I threw at it, although I will confess to spending more time buzzing the Golden Gate Bridge in F/A 18 Interceptor than perhaps I should have.

Cloanto also dropped a fresh version of C64 Forever, which takes the GUI of Amiga Forever and wraps it around the VICE emulation engine, also with a variety of ready-to-go games and "legal CBM system ROMs" as the company puts it.

The games, while nice-to-have (much like the Amiga Forever variant) can easily be picked up elsewhere, but the ROMs and ease of use make the package worth having. The classic Commodore 64 and Vic 20 hardware is present and correct, as one would expect, but the more obscure hardware is always more fun for tinkering. Some quality time spent on the PET 2001 left me pondering ways of attaching an original PET keyboard (in the same way I’d managed to ruin several old Texas Instruments parts with careless application of the soldering iron.)

As with Amiga Forever, Cloanto would really like you to part with some cash for C64 Forever - €14.95 as a start, although a feature-limited freebie version can also be had. Many will balk at having to pay – after all, VICE is the backbone of C64 Forever and is free software. Also, C64 Forever is Windows only (unlike Amiga Forever, which is cross platform.)

However, with dedicated hardware such as the C64 Mini currently retailing between £50 and £60 (although expect to see an influx on ebay before long) that price doesn’t look such bad value, if not quite so good as "free".

The only other problem is that sometimes not even rose-tinted nostalgia-specs can prevent the games of yesteryear being, well, just a little bit rubbish. Except F/A 18 Interceptor. ®

World+dog to get retro classic Commodore 64 for Christmas

Some folk have Photoshop and too much time on their hands

Commodore PET lurches out of its 1970s grave – as a phablet

OK brainiacs, we've got an IT cold case for you: Fatal disk errors on an Amiga 4000 with 600MB external SCSI unless the clock app is... just so