If you've been dying to run some math on a dinky toy quantum computer, IBM may have something for you

Well, we all have to start somewhere: Rentable Q machine has just 20 qubits 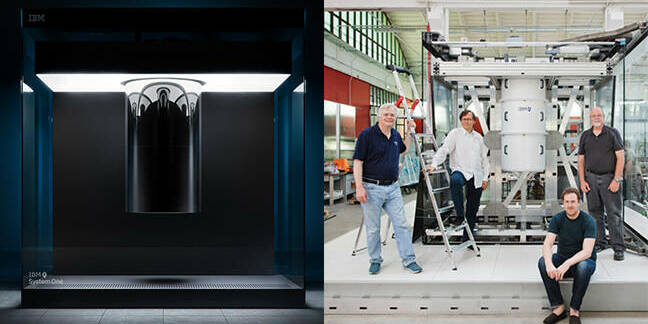 IBM today claimed it will shortly sell the world's first commercial quantum computer – or, more accurately, calculation time on it.

The IBM Q machine has been years in the making, and is an extremely specialized bit of equipment, requiring the environment around it to be very tightly controlled to work properly.

Pretty much all quantum computers up until now have been run in research laboratories due to relying on precisely controlled conditions. IBM claims the Q's unique and custom design allows it to run outside such specialized and restrictive environments, allowing it to offer next-generation computing on a commercial basis to a wide range of users.

IBM has shared few details on the actual specs of the Q beyond the fact it is contained within a nine-foot square box designed by the same people who built housing for the Mona Lisa in Paris and the Crown Jewels in London. Based on past announcements, the IBM Q is a 20-qubit machine. This represents a step forward in quantum computing power, though it is not enough to be that useful.

Last month, the US National Academies of Sciences, Engineering, and Medicine stated it would be ten years or more before the number of qubits available and the quality of their calculations is good enough for commercial deployment. Intel agreed, saying you'd need a million or more qubits to be commercially relevant, and that such technology was seven to ten years away.

Quantum computing is a little hard to explain. While today's computers use bits of zeros and ones to carry out decisions and math, quantum computers exploit the superposition of quantum bits, or qubits, to perform calculations. Here's a gentle introduction to the technology, from the University of Waterloo in Canada:

Boffins are confident that quantum computers could start solving problems that are beyond the reach of even the most powerful conventional computers. That ranges from predicting with far greater precision natural events like storms or earthquakes to developing new drugs to potentially decrypting encrypted communications (again in a decade or so).

'Quantum supremacy will soon be ours!', says Google as it reveals 72-qubit quantum chip

The hard part in producing a quantum computer is making it reliable: the qubits that make it so powerful lose their properties within 100 microseconds – and that time falls off significantly with any introduction of vibrations or temperature change. Hence the need for the Q's special box of half-inch thick borosilicate glass that forms an airtight enclosure.

All the components within the IBM Q are carefully isolated from one another to limit vibrations, and the result, according to IBM, is "quantum hardware designed to be stable and auto-calibrated to give repeatable and predictable high-quality qubits." In other words, something that can be used reliably and relatively usefully for commercial purposes.

It is thus a highly engineered piece of kit. By saying it will make the Q commercially available, even if it is far off a fully fledged quantum computer, IBM is trying to signal its lead in a market that could soon be worth billions of dollars. It is competing with a number of other companies including US-based Rigetti and Canada’s D-Wave.

To be clear, you won't be able to buy your own quantum computer, though you will be able to pay to run calculations on it. IBM has not given a date for when its IBM Q will be available. Nor, crucially, a price tag for its computing power. But given that even the idea of a quantum computer was a theoretical possibility 50 years ago, it is nonetheless remarkable that IBM says it can pull one together and rent it out.

The tech giant put out some sexy pics of the IBM Q looking like an alien transportation machine though in reality it will likely look much uglier and more functional. Not that any of us will get a chance to see it.

In addition, Blue Big said it will open its first Quantum Computation Center in Poughkeepsie, New York, at some point this year, for commercial clients to use the technology. IBM has run a free "IBM Q Experience" since 2016 during which millions of experiments have been run, using simulators and limited five-qubit hardware, over the internet, and more than 100 research papers published with Q results, we're told.

IBM also has a full-stack, open-source quantum software development kit to create and run quantum computing programs. Something that will start getting serious attention when its new computing resources go online. ®