Chinese rover pootles about... on the far side of the friggin' MOON

Plus: SpaceX gets back to some Falcon work

Roundup In the week that New Horizons snapped its snowman, China took its rover out for a spin on the lunar surface and SpaceX fired up another Falcon 9.

China continued stoking the fires of space fanbois desperate for an Apollo-style space race as its rover trundled off the Chang'e 4 lander and on to the far side of the Moon. 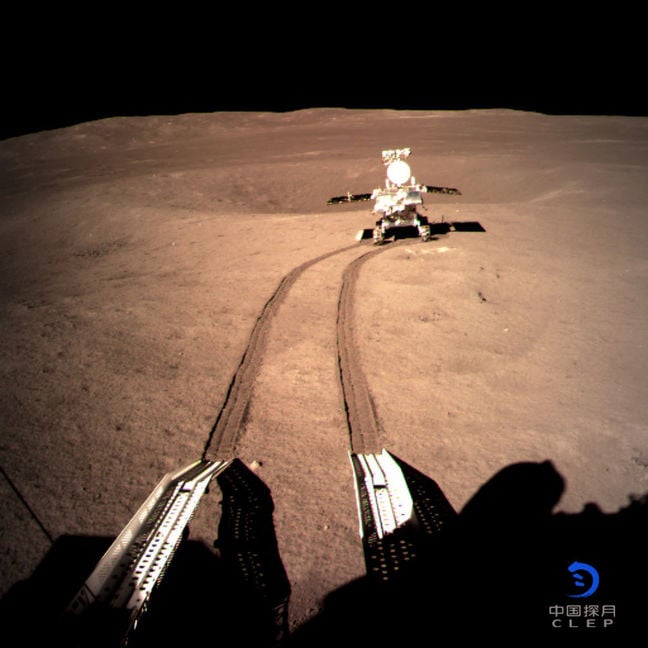 Chang'e 4 landed on 3 January following a sequence of mostly successful missions since 2007's Chang'e 1 lunar orbiter. It is also the second in the Chang'e series to land on the surface.

Third if you count Chang'e 1, although only the very generous would consider disposing of an orbiter by slamming it into the Moon at the end of its mission "landing".

Chinese boffins wasted little time celebrating the landing, and had the follow-up to the short-lived Chang'e 3 rover, Yutu (or Jade Rabbit), make its way down the ramp from the lander for its first roll onto the surface.

Yutu 2 is built from spares left over from its ill-fated wheeled predecessor, and engineers expect it to have a considerably longer lifespan – three months or more – thanks to lessons learned from the previous mission. It also lacks its predecessor's robot arm, made up for by a suite of new instruments, some provided by European scientists.

The Swedish Institute of Space Physics has provided a gizmo to examine how charged particles from the Sun interact with the Moon's surface in the hope of identifying the source of the Moon's water.

Yutu 2 relies on solar power so will have to hibernate during the 14-day lunar night, due to start in mid-January. Once awake, engineers are aiming for around six miles of rolling. A big improvement on Chang'e 3's rover, but some way behind 1973's Lunokhod 2, which managed to cover over 24 miles before eventually conking out.

The Apollo lunar rover travelled over 22 miles during the few days Apollo 17 spent on the lunar surface, but it will, alas, be some time before humans are rolling on the lunar maria once more.

SpaceX readies next launch (no, not that one)

While the Crew Dragon captured the headlines last week, Musk's rocketeers continued their day-to-day work with the static firing of the Falcon 9 booster at pad SLC-4E prior to a planned 8 January launch of its last batch of Iridium satellites.

Ten Iridium satellites will fly atop the Falcon 9 and be flung into a low Earth polar orbit if all goes well. It will also be the second flight for the first stage, having first seen use launching the Telstar 18 VANTAGE communications satellite in 2018. SpaceX expects to recover the booster, once again making the miraculous seem mundane.

Away from the business of flying Falcons, SpaceX supremo Elon Musk took time to share some updates on his planned monster rocket, Starship, with the Twittersphere.

Aiming for 4 weeks, which probably means 8 weeks, due to unforeseen issues

Construction is well under way on the first test article of the rocket that Musk hopes will take humans around the Moon and on to Mars. The test rig, however, will only be used for "hops" to check out the landing systems and the Raptor engines in the structure, much like the Grasshopper rocket used by SpaceX during the development of the Falcon 9.

Musk has promised that when complete, the test article will resemble the sleek lines of the planned production rocket rather than the Wallace and Gromit affair it currently calls to mind. He also, in a rare moment of humility, admitted that the first hops were likely eight weeks away rather than four.

It's OK, Elon. We can wait. NASA's SLS rocket is still years away.

Yes, will be extremely intense. Early flights are especially dangerous, as there’s a lot of new hardware.

Starship (or Starhopper) aside, Musk also provided some spectacular imagery of the crew access arm attached to the Crew Dragon. Ever the expectation management specialist, the SpaceX head honcho warned that the first flights of the company's first crewed spacecraft would be "especially dangerous".

However, with an agency as risk-averse as NASA looking on nervously and already twitchy following Musk's earlier escapades, letting the engineers work out the dangers might be a safer approach as the first demonstration launch creeps closer. ®