Apple's pricing woes do not seem to have worried PC giant Dell, as the flinger of Windows – and occasionally Linux-powered silicon – appears to have unleashed another multimillion-pound laptop on the world.

The company will cheerfully sell you a 17-inch mobile workstation in the form of its Precision 7720 for a gnat's whisker over £7m. Yes, that's a seven followed by six zeroes. 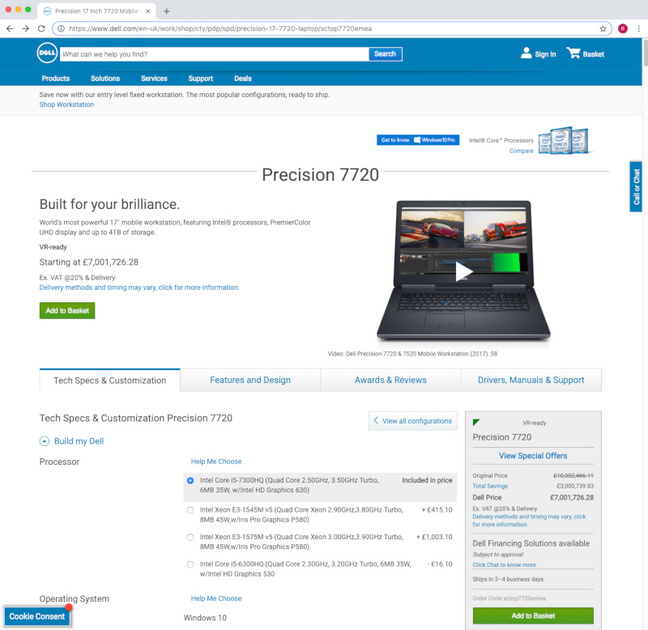 The £7,001,726.28 (excluding VAT and delivery) laptop packs a punch, featuring a mighty Intel Core i5-7300HQ CPU and rocks Chipzilla's mighty HD Graphics 630. A gamer's delight, for sure – why should workstation-botherers have all the fun?

You could, of course, take things further by spanking another thousand to get some Core i7 chippery into the mix or £719.60 of your best British currency to see the machine outfitted with 64GB of RAM.

We knew things might get pricier as Brexit approaches, but this seems excessive.

Dell, of course, could claim this is a bargain; the original price was over £10m, so you'd be saving yourself a whopping £3m. That's enough to buy around 3,000 iPhones or, more usefully, nearly 700,000 pints of beer at Vulture Central's local hostelry. Or half a Brexit ferry company (ferries not included).

We contacted Dell to see if we could get one in for review, but have yet to receive a response.

That price tag, while it may seem a little on the high side, is but nothing compared to the sleeker Precision 5530, whose svelte 15-inch chassis was lightening wallets to the tune of $13m (about £10.2m at current rates) back in November 2018.

While we like a pricey, powerful laptop as much as the next tech journalist, the hardware budget at Reg towers is unlikely to stretch far enough to permit a purchase. And if we have a seven-figure sum that we were determined to set fire to, we'd probably throw it at these guys instead. ®

The Reg tips its hat to reader Bill Bigge, who sent this in.