An SSD controller company has demonstrated faster SSD access with a gen 4 PCIe controller that was twice as fast as gen 3 PCIe.

The PCIe gen 4.0 standard is produced by the PCI-SIG consortium and specifies a 16Gbit/s data link speed with up to 16 links or lanes, delivering 64GB/sec, double PCIe gen 3’s 32GB/sec maximum. 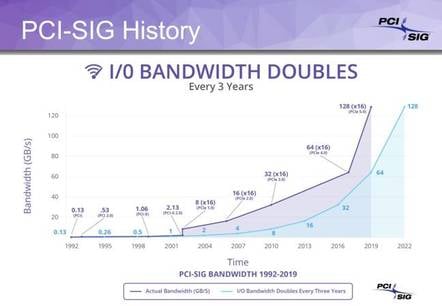 The firm said it hoped to reach 4.8GB/sec sequential bandwidth and up to 900,000 IOPS as it refines the tech and moves to Toshiba BiCS4 flash, which has 96 layers.

Phison supplies controllers on an OEM basis to SSD manufacturers and a report predicted we should see the PS5016-E16 released in the third quarter with PCIe gen 4 SSDs hitting the streets in the fourth quarter onwards. However, the Phison has said the E16 is just for desktop and gaming systems. Hopefully the company, along with other SSD controller developers, will soon release enterprise SSDs using PCIe gen 4.

AMD's 3-third generation Ryzen "Matisse" gaming and desktop CPU, an 8-core device fabricated with a 7nm process, will be shipping from mid-2019 and supports PCIe gen 4.0 x16 - 16 lanes - in its IO chiplet.

We understand Intel will support PCIe 4 in the second half of this year, with its Omni Path fabric.

A PCIe gen 5 standard should be released by the end of 2019 and provide for 128GB/sec from a 16-lane implementation. PCIe life just keeps on getting better, although device suppliers may be tempted to bypass v4.0 and go straight to v5. ®