People say tabloid hacks are always looking for an angle. This time, they'd be right: Tilting disk of proto-planets spotted

Only 45 parsecs away if you fancy a look up close

Astronomers have found the first example of a protoplanetary disk forming at a right angle to its parent stars, according to a paper published in Nature Astronomy this week.

The HD 98800 system, located about 150 light years away, has been known for while. For years, its most distinguishing feature to Earth-based boffins was its quadruple star system, consisting of two sets of twin stars that are separated by a distance 54 times of that between the Earth and the Sun.

Now, researchers have discovered another oddity. One star pair is surrounded by a protoplanetary disk: a thick ring of gas and dust that can harbour budding planets. But it's oriented in a polar configuration. In other words, the disk is at a right angle to its stars, unlike most planetary systems which are coplanar; where the planets orbit the star on the same plane, like our Solar System.

“Discs rich in gas and dust are seen around nearly all young stars, and we know that at least a third of the ones orbiting single stars form planets,” said Grant Kennedy, first author of the paper and a research fellow at the University of Warwick in England.

"Some of these planets end up being misaligned with the spin of the star, so we've been wondering whether a similar thing might be possible for circumbinary planets. A quirk of the dynamics means that a so-called polar misalignment should be possible, but until now we had no evidence of misaligned discs in which these planets might form."

The researchers analysed data taken from the ALMA telescopes (Atacama Large Millimeter/sub-millimeter Array) to work out the orientation of the disk. They aren’t sure if there exists any planets around the stars yet, but the evidence so far has led them to believe that it’s possible for planets to orbit perpendicular to their stars. 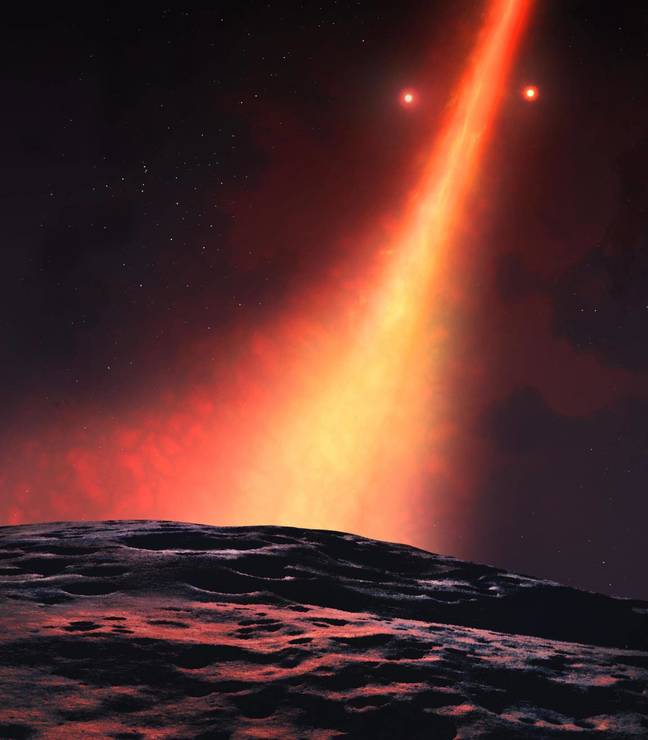 Artist's impression of what the sky might look like from an orbiting planet. Image credit: University of Warwick/Mark Garlick

“If the rest of the planet formation process can happen, there might be a whole population of misaligned circumbinary planets that we have yet to discover, and things like weird seasonal variations to consider," Kennedy added.

Any inhabitants of the planets in the HD 98800 system would see four stars in the sky and the shadows of the stars would appear at different times. The amount of sunlight would also vary across different latitudes. ®