The Large Hadron Collider is small beer. Give us billions more for bigger kit, say boffins 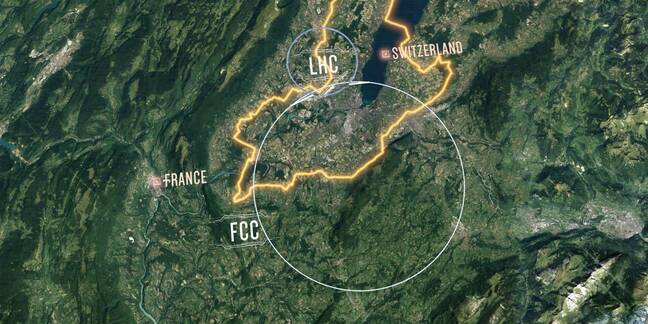 Size of FCC in comparison with LHC in Geneva. Image credit: CERN

CERN, the European research hub in Geneva, is already home to the world’s largest particle accelerator – and it’s hungry for another one that’s bigger and better.

Documents published this week by the European Organization for Nuclear Research, also known as CERN, revealed plans for the Future Circular Collider (FCC).

The circular tunnel would have a circumference of about 90 to 100 kilometers (62 miles), almost four times longer than the current Large Hadron Collider (LHC) at 27 kilometers (16.7 miles). It would also be over seven times more powerful, able to accelerate particles to 100 teraelectronvolts (TeV) compared to the LHC’s 14 TeV.

The higher energies allow physicists to probe subatomic particles at smaller wavelengths. The LHC’s biggest accomplishment so far has been the discovery of the Higgs Boson, a particle first theorized over half a century ago.

But there are still gaps in the Standard Model of particle physics, questions that physicists are still unable to answer. What is dark matter? Why is there more matter than antimatter? How much mass do neutrinos have?

No, you haven't gone deaf – the Large Hadron Collider has been wound down for more upgrades

“Proton colliders have been the tool-of-choice for generations to venture new physics at the smallest scale,” said Eckhard Elsen, CERN’s director for research and computing.

"A large proton collider would present a leap forward in this exploration and decisively extend the physics programme beyond results provided by the LHC and a possible electron-positron collider."

Scientists predict that the LHC will last until about 2035. It takes about 20 years to design, build and test such ambitious apparatus so CERN needs to get a move on if it hopes to operate a new particle smasher by 2040.

All of this will cost a lot of money. CERN estimates it needs about €5bn ($5.7bn) to carve a 100km tunnel, and another €9bn ($10.3bn) to whack a particle smasher inside of it. Although the planned superconducting proton machine - which would use the tunnel - would cost another €15bn ($17.1bn), it would buy good pure research until the end of the 2050s, CERN says. ®