Watch an AI robot program itself to, er, pick things up and push them around

Why can't robots just learn to do things without being told? 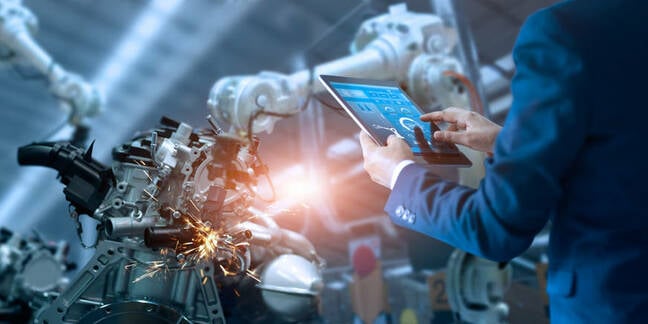 Note: This robot was not used in the experiment

Vid Robots normally need to be programmed in order to get them to perform a particular task, but they can be coaxed into writing the instructions themselves with the help of machine learning, according to research published in Science.

Engineers at Vicarious AI, a robotics startup based in California, USA, have built what they call a “visual cognitive computer” (VCC), a software platform connected to a camera system and a robot gripper. Given a set of visual clues, the VCC writes a short program of instructions to be followed by the robot so it knows how to move its gripper to do simple tasks.

“Humans are good at inferring the concepts conveyed in a pair of images and then applying them in a completely different setting," the paper states.

"The human-inferred concepts are at a sufficiently high level to be effortlessly applied in situations that look very different, a capacity so natural that it is used by IKEA and LEGO to make language-independent assembly instructions."

Don’t get your hopes up, however, these robots can’t put your flat-pack table or chair together for you quite yet. But it can do very basic jobs, like moving a block backwards and forwards.

The VCC works out what commands need to be performed by the robot in order to organise the range of objects before it, based on the ‘before’ to the ‘after’ image. The system is trained to learn what action corresponds to what command using supervised learning.

Dileep George, cofounder of Vicarious, explained to The Register, “up to ten pairs [of images are used] for training, and ten pairs for testing. Most concepts are learned with only about five examples.”

Here’s a diagram of how it works:

A: A graph describing the robot's components. B: The list of commands the VCC can use. Image credit: Vicarious AI

The robot doesn’t need too many training examples to work because there are only 24 commands, listed on the right hand of the diagram, for the VCC controller.

And here’s the robot in action, embedded below. The physical objects laid out in front of the robot do not need to be explicitly the same as the abstract ones represented in the input and output images.

Researchers constructed 546 different tasks or concepts, ranging from four lines of instructions to 23, including different numbers and sizes of objects and the color and texture of the background to see whether the robots could adapt to more realistic settings. Out of the 546 concepts, six were tested on two different robots.

One was the Baxter model from Rethink Robotics, and the other was the UR5 robo arm from Universal Robots.

“We thought of each of those concepts individually,” said George. "Then we wrote little python programs to generate multiple images corresponding to each concept."

Ding dong merrily on high. In Berkeley, the bots are singeing: Self-driving college cooler droid goes up in flames

UR5 was better at carrying out the tasks and could execute more than 90 per cent of the six concepts tested, compared to Baxter’s 70 per cent, the paper claims. Hardware mishaps, such as objects slipping out of the gripper, were common failures. The Baxter robot used by Vicarious was older, and over time the camera had blurred and its motions were less precise.

“Getting robots to perform tasks without explicit programming is one of the goals in artificial intelligence and robotics,” the researchers wrote.

Other types of methods like imitation learning have been introduced, where agents learn by copying demonstrations during the training process. These bots, however, are less likely to be able to adapt to situations beyond the scope of the demos.

Here, there are no explicit demonstrations, something the researchers describe as "zero-shot learning". The agent has to learn and encode abstract concepts and then transfer the learned model to real world scenarios.

It sounds pretty fancy, but it’s still early days and the tasks here are very rudimentary. It’ll be a while yet before any AI robots like these ones succeed in factories. Vicarious said it will be testing "some variations of the idea, in limited settings".