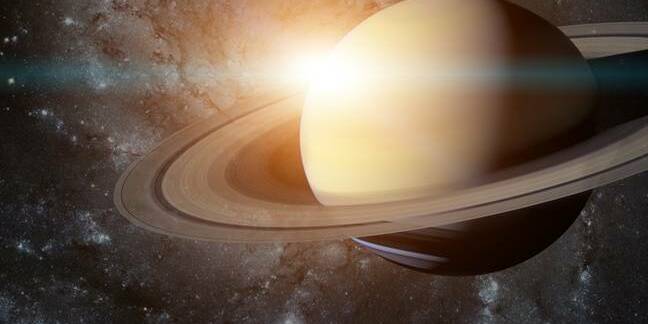 Beautiful ... An artist's impression of Saturn (Not drawn by dinosaur. They didn't have telescopes)

Saturn’s characteristic rings may only be as old as 100 million years, and thus formed during a time when dinosaurs still roamed on Earth.

Although NASA’s historic Cassini mission to Saturn is over, astrophysicists are still discovering new facts about the gas giant from the amassed data, including the history of the planet's rings. A paper published in Science this week reveals that Saturn’s rings could be as young as 10 million years old and are disappearing relatively quickly.

As the Cassini spacecraft dipped in between Saturn and its rings, its movements were influenced by the planet’s gravity. The resulting motion of the probe suggested Saturn’s gravitational field was much higher than expected, and this field is affected by how fast its internal matter spins, so there was some process on the planet that the scientists failed to account for. And it turned out to be pretty impressive winds.

“We constructed models of the gravitational fields, and none of those models matched the data. Now, we know it’s from the winds that are 9,000 kilometers deep,” Burkhard Militzer, co-author of the paper and an associate professor at the University of California, Berkeley, told The Register.

Crucially, these gravity measurements also helped them calculate the total mass of Saturn’s rings. At about 1.54 x 1019 kilograms, that's less than a 20,000th of Mercury's mass, the smallest planet in the Solar System. The mass of the rings also helped the researchers to estimate their age.

The boffins assumed that the particles in the rings were made from pure ice. Over time, the ice's clean surfaces were blackened with debris from things like meteoroid bombardment. The space dirt causes the total mass of the rings to increase.

“We know how much meteorite material falls in and we measure the color of the particles to see how much added up over time,” Militzer said. Since the total mass of the deposited meteorite dust is simple to estimate, the researchers can estimate how long the rings must have been around for, assuming that the buildup of debris is pretty steady over time.

There is no evidence that the extinction of the dinosaurs and the formation of Saturn’s rings are linked, he warned. “But both events show that massive impacts can shake up the Solar System.”

The data doesn’t show, however, how the rings were formed in the first place. Made up of bits of dust, rock and ice, the small particles would keep going round the planet if left undisturbed. But small gravitational perturbations have nudged some of them out of place, leading some matter to escape.

The rings are slowly losing mass, Militzer said. He reckons they will be here for another 100 million years or so.

“[That time frame] is good enough for us, but compared to Saturn’s lifetime it’s relatively short.” ®

Probe went this close in 2004, but the light is better this time around

September set for point of no return