Western Digital has remodelled its M.2 SN720 mobile and edge device gumstick SSDs into a faster SN750 gamers' drive with a heatsink option.

The Black SN750 comes in 256GB, 512GB, 1TB and 2TB capacities mounted in a single-sided M.2 card with an NVMe interface. It uses 64-layer TLC (3bits/cell) NAND. The heatsink option is a black slab with diagonal ridges cut across it. It certainly looks snazzy – but what does it do? 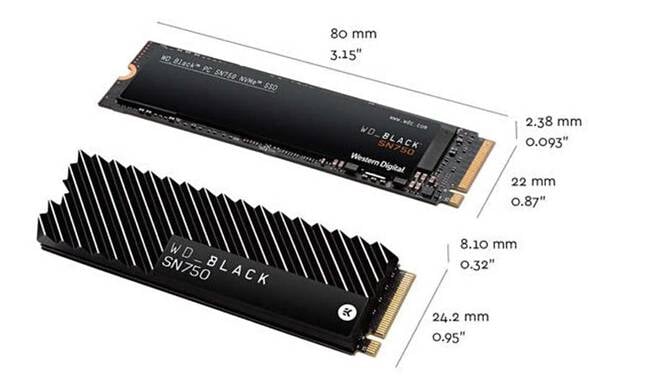 WD boasted that it will help gamers "snag a tangible, next-level competitive boost during intense PC gameplay" by "allowing the SSD to run for longer periods of sustained read and write performance, compared with non-heatsink versions".

However, The Reg did not receive any stats showing this so we don't know for how much longer the drive will run at full speed before getting throttled back.

A software dashboard can be used to stop the drive switching into low-power mode when idle, saving a few microseconds switching back up to full power.

Sticking WD's original SN520, SN720 and SN750 performance numbers in a table shows how they have increased. We've added Samsung's 970 EVO, a competing TLC M.2 drive, as a comparison point:

The SN750 has a noticeable improvement over the SN720 in the random write IOPS area, with a jump from 400,000 to 560,000. The random IOPS numbers are better than Samsung's 970 EVO, although that drive has slightly better sequential read and slightly worse sequential write numbers.

The highest performance numbers for the SN750 come from the 1TB version, with the 2TB version using a 512Gbit die instead of the 256Gbit ones in the other models. That keeps the 2TB product a single-sided M.2 product.

What about prices? The 250GB version costs $79.99 (MSRP), the 2TB product $499.99. The non-heatsink versions with up to the 1TB capacity level are available now. We have to wait until the spring for the 2TB capacity variant and the heatsink options. ®