So this is how that terrifying killer AI will end us... by pushing us down hospital wait lists?

Smartish system has a good stab at prioritizing patients, has problems deciding what's critical, tho 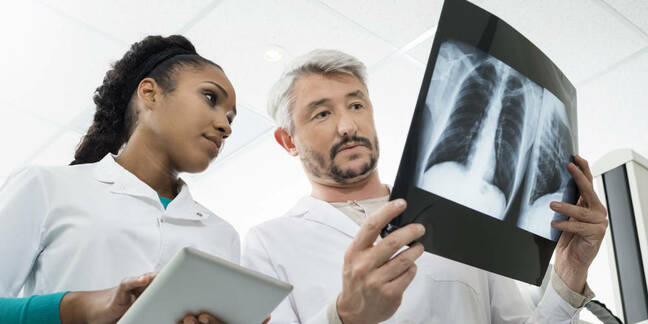 Artificially intelligent software can help slash the wait times for patients anxious to see the results of their X-ray scans, it is claimed.

Long waiting times are the bane of hospitals worldwide. And, so, researchers from the King’s College London and the University of Warwick in old Blighty believe they can alleviate the X-ray results backlog by using a mixture of computer vision and natural language processing techniques. Essentially, trained software looks at someone's X-ray scan and suggests whether they should be seen immediately and given their results, or made to wait in a queue with others, based on how serious their condition is.

“It is no longer feasible for many Radiology departments with their current staffing level to report all acquired plain radiographs in a timely manner, leading to large backlogs of unreported studies. In the United Kingdom, it is estimated that at any time there are over 300,000 radiographs waiting over 30 days for reporting.”

The system thus seeks to help radiologists prioritize patients by ranking their X-ray scans in order of medical urgency. The team managed to cut the average wait times for patients ranked as "critical" from eleven days to less than three, and those as "urgent" from about eight days to four.

Eye eye! DeepMind teams up with doctors to ogle eyeballs for illness

To pull this off, first, the researchers labelled 329,698 chest X-ray scans collected over a decade as "critical," "urgent," "non-urgent," or "normal." Next, these labels and images were fed into two convolutional neural networks to teach them which features in the scans were commonly associated with each category.

For example, X-rays that had visual symptoms like abscesses, possibly from intra-abdominal diseases, are considered critical. Those with hiatus hernia, a condition when the part of the stomach swells and pushes into the chest are deemed non-urgent.

After validation and testing, the system was found to be most sensitive to normal and urgent chest scans, but was less effective at correctly labeling critical and non-urgent scans. The worse case scenario for a patient, where the system incorrectly tags their urgent scan as normal, was pretty rare, occurring one per cent of the time, we're told.

“Of note, five of the 385 'critical' radiographs were labeled as normal. On re-review of these five critical radiographs, the AI interpretation of normal was unanimously believed to be correct in four of five instances,” the paper stated.

The researchers said the system needed to be improved further to reduce the likelihood of incorrect classifications. It can also only judge from single X-ray scans, and doesn’t give radiologists any other context such as a patient’s previous medical history.

“The results of this research shows that alternative models of care, such as computer vision algorithms, could be used to greatly reduce delays in the process of identifying and acting on abnormal X-rays – particularly for chest radiographs which account for 40 per cent of all diagnostic imaging performed worldwide," said Montana. ®