Crispest image yet of Ultima Thule arrives on Earth, but grab a coffee while the rest downloads

The New Horizons spacecraft has continued its dribble of data back to Earth with a fresh image of Ultima Thule.

The image was taken during New Horizon's 1 January 2019 flyby of Kuiper Belt object 2014 MU69 when the spacecraft was 4,200 miles away, seven minutes before the closest approach.

Taken with the Multicolour Visible Imaging Camera at a resolution of 135 metres per pixel, the image made it to Earth by 19 January. Following processing by scientists to sharpen things up, the image shows what look like pits as well as a smattering of impact craters. 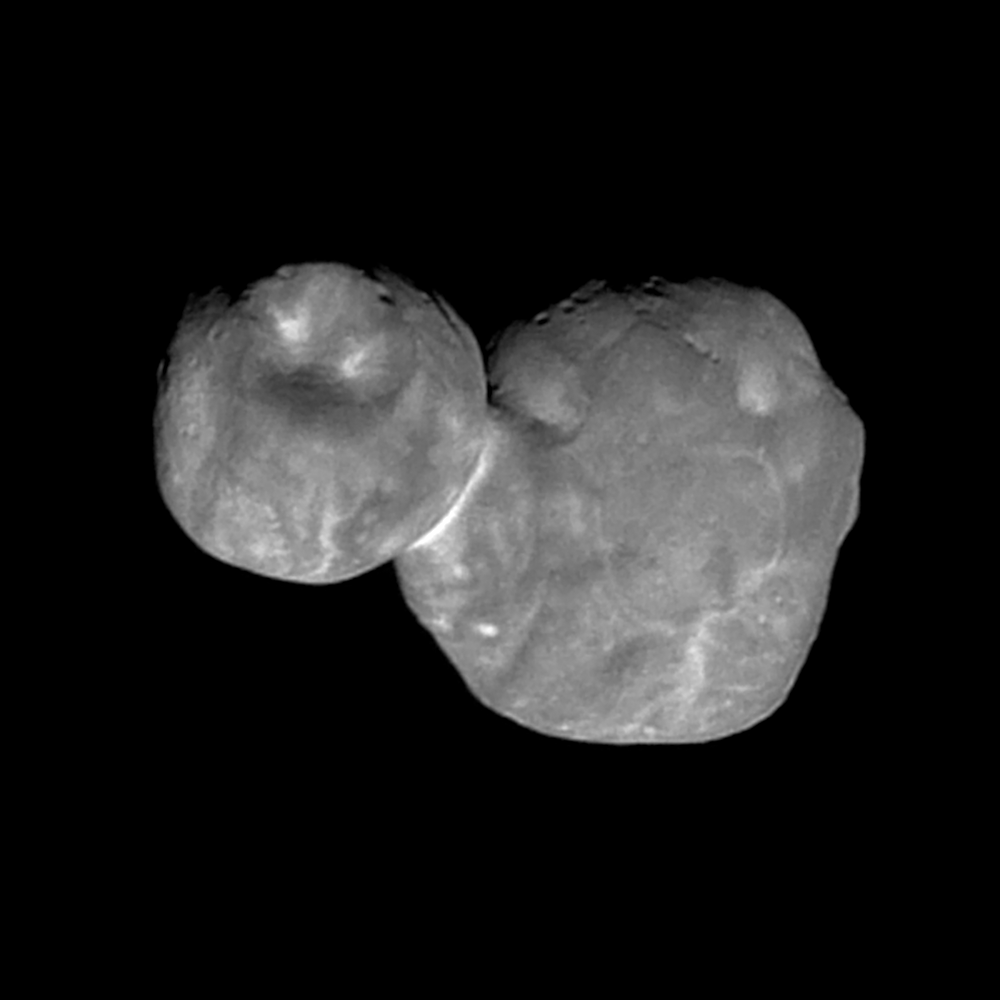 More data will be needed before scientists can be sure if these pits are the result of venting, some sort of collapse or another geologic process. Dark and light areas over the two lobes of Ultima Thule also give clues as to do how the things formed with the "collar" showing up brightly.

Alan Stern, Principal Investigator for the mission, was obviously pleased as punch with the new imagery. "Over the next month there will be better color and better resolution images that we hope will help unravel the many mysteries of Ultima Thule," he said

The data, however, continues its slow trickle from the spacecraft's onboard storage. Mission operations manager Alice Bowman explained that the rates from New Horizons' 2.1m antenna hovered between 944bps and 2,003bps with both transmitters fired up and the spacecraft in spin mode.

To put that in context, this vulture's first modem included an acoustic coupler and could just about manage 300bps on a good line. Enough to access a basic BBS. The excitement of moving to a 2400bps US Robotics modem was almost unbearable (and quite a bit quicker than the distant New Horizons probe).

At those speeds, mission managers reckon it will be well into 2021 before all the data is received. ®

We were wrong about the chicken drumstick, OK?

NASA says New Horizons' next stop might have a moon

Remember that 747 with an open door and a telescope? It spotted a moon-esque blip

Kuiper-belt-bound craft needs a few weeks of tweaks to prepare for Space Duck 2.0

Close Encounters of the Kuiper Belt kind: New Horizons to come within just 3,500km of MU69

Probe skipped past Pluto by 12,500km, so this rock needs to prepare for its close-up

Roundup Also: Is that an aerospike in your pocket or are bells more your thing?