Cisco has added performance features to its HyperFlex hyperconverged infrastructure (HCI), with all-NVMe systems, Optane SSD caching and FPGA acceleration. It has also extended HyperFlex out to ROBO* sites with central management.

HyperFlex 4.0 was announced at Cisco's Barcelona CLEUR gig and features Edge 3-node clusters, with one or two UCS M4 or M5 (Xeon SP) CPUS per node. Once racked, cabled and switched on the systems can be managed remotely using Cisco’s Intersight cloud-based management facility.

There are 11 HyperFlex flavors, which are 1U or 2U in size depending on the model, and are based around HX 220c and 240C M4 and M5 systems, meaning fourth and fifth generation UCS servers. The M5s use Xeon SP processors with the M4s using earlier Xeons.

The HyperFlex system could be used for ROBO (remote and branch office) and other Internet Edge deployments before v4.0. The new thing is support for the central cloud-based Intersight management facility lessening the need for skilled IT staff at the edge sites, in theory at least.

An edge site is shipped as a 3-node cluster with an upper limit of 4 nodes. Get an M5 Edge datasheet here.

The HX 220c All-NVMe M5 system has 8 x 1TB or 4TB NVMe capacity drives plus one NVMe 240GB SSD for caching and another for write-logging.

The datasheet doesn't say whether these are Optane SSDs but a Cisco blog stated: "Our latest HyperFlex release ups the game on performance yet again by utilising Intel Optane caching and all NVMe capacity drives." 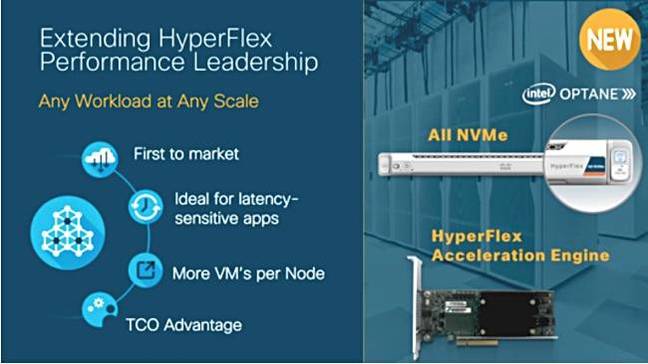 Cisco actually announced Optane caching support in HyperFlex v3.5 in June, so this v4 inclusion is after the fact.

This all-NVMe/Optane caching system should be great for latency-sensitive apps,

The v4.0 release also supports use of an add-in PCIe card featuring an FPGA. This is the HX-PCIE-OFFLOAD compression/decompression offload card that was supported in HyperFlex v3.5 and shipped in January, 2019.

It can be fitted to new deployments of the HX 240c M5SX and M5L all-flash and hybrid models but not if they run Hyper-V or are in stretch clusters. All nodes in the cluster must have the card and the cards don’t work with HX Data Replication.

We don't have availability or pricing data for the all-NVMe HyperFlex nodes.

Cisco's main competition in the area is Nutanix, followed by Dell EMC/VMware. ®