Final update The day of week ends in "day" so, of course, Microsoft's Office 365 has fallen over, and Azure portal is having a wobble, too.

Right now, if you're trying to login afresh into Microsoft 365, there is a 50-50 chance it will work. The outage appears to be worldwide, and Australia and New Zealand may as well give up, according to the latest Downdetector outage map. They are hardest hit right now as it's their working morning. 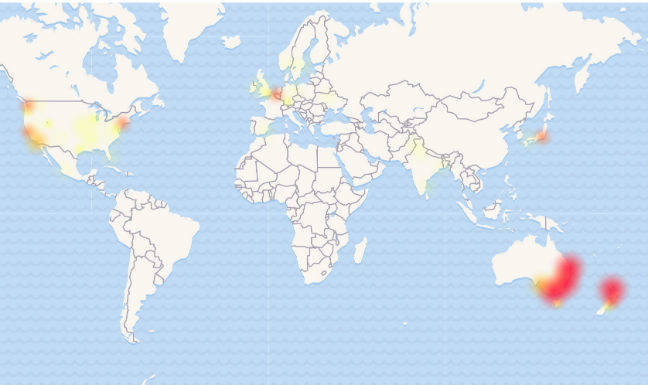 The Antipodes should just head to the pub at this point

"Affected users are unable to authenticate to and access Microsoft 365 services," Redmond's Office 365 status page confirmed in the past hour. It went on:

Customers that have their authorization cached are unaffected by this issue, and new authentications are succeeded approximately 50 percent of the time.

A portion of network infrastructure that facilitates authentication requests is degraded, affecting access to one or more Microsoft 365 services.

Microsoft 363 fell over at 2115 UTC today, and another update on the situation is due within the hour. Office 362 suffered downtime only just last week.

And speaking of networking issues, Microsoft Azure portal is also down globally as we type this:

Engineers have identified an issue with Level 3 as an internal network provider. Steps have been taken to failover to an alternative DNS provider. Some customers may start seeing recovery. The next update will be provided in 60 minutes or as events warrant.

We'll let you know if and when the situation improves. ®

As of 0100 UTC, the service is gradually recovering, if not back on its feet again. We note this cockup hit more than just Office 356. "Dynamics 365, LinkedIn, and other services that leverage Azure Active Directory (AAD) are or were also affected by this event," Microsoft confirmed.

Azure portal is back up, too, and it was all apparently due to a DNS issue with CenturyLink. Here's the latest from Team Azure:

For customers using Azure Monitor, there was a period of time where alerts, including Service Health alerts, did not fire.

Preliminary root cause: Engineers identified a DNS issue with CenturyLink as an internal DNS provider.

Mitigation: DNS services were failed over to an alternative DNS provider which mitigated the issue.

Updated to add on January 30

A Microsoft spokesperson has been in touch to say: "We’ve fixed the delay some customers may have experienced accessing cloud resources."